A group of Labour canvassers knocking on doors in Preston Park were confronted by Caroline Lucas’s husband in the street this weekend. 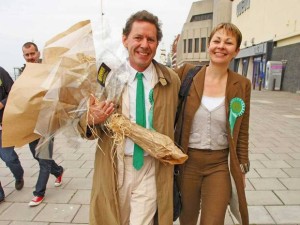 Richard Savage came out of the Green candidate’s family house to speak to the Labour group on Sunday evening, which included city leader Warren Morgan and volunteers.

They said they were left shocked and shaken by the exchange, in which they say Mr Savage told them Labour candidate Purna Sen should not be standing in Brighton Pavilion against his wife.

But Ms Lucas’s team has denied he said that, but was instead taking the opportunity to challenge the “aggressive online behaviour” of Labour activists as they passed his front door.

Mr Morgan said on Twitter: “Out with a magnificent team of seven in Preston Park when something quite extraordinary happened.

“The husband of the Green candidate and former MP Caroline Lucas came out of his house and started to shout abuse at us!

“‘WHY ARE YOU STANDING AGAINST THE BEST MP THIS COUNTRY HAS EVER HAD? YOU ARE POISONOUS!’ As if no-one should dare contesting her seat.

“Terrible behaviour – we shall be making a complaint and asking for an apology. One of our volunteers was quite shaken.

“Elections are stressful, but no-one should stand in the street and shout abuse at members of other parties.”

A spokeswoman for Purna Sen’s campaign Purna4Pavilion said: “We are aware of the situation at a Preston Park campaigning drive and that some people were quite distressed as the situation unfolded.

“We are concerned that volunteers could be dissuaded from joining the campaign.

“Campaigning is a healthy part of democracy and participants should be treated in a respectful manner.”

Green Party Target Constituencies Campaign Manager, Adam McGibbon, said: “We completely refute these allegations. The Labour Party are trying to score cheap political points in an election and we advise voters to be aware.

“Richard, as Caroline’s husband, was right to take the opportunity to challenge the aggressive online behaviour of some of the Labour Party activists who were present, as we believe voters deserve a positive election campaign.”

No complaint has been made to Sussex Police regarding the incident, and Brighton and Hove News understands Labour has dropped the matter.