Caroline Lucas has held Brighton Pavilion for the Green Party, increasing her majority to almost 8,000. 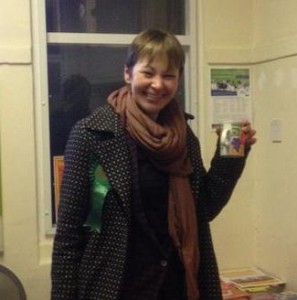 She won the seat with 22,871 votes, a convincing win for the party after she first won with a relatively slim majority of 1,252 five years ago.

She said: “Tonight’s victory is your victory.

“I’d like to thank my family – Richard, you are my rock. Isaac, Theo, thank you so much for all of your support and all of your love.

“We’ve shown we can win elections and serve the people. Thank you for putting your faith in me again.

“This is an incredibly special place. It is creative, compassionate and brave and I’m proud to call it my home.

“This is the Green’s most successful campaign ever. It’s even clearer tonight that the time for electoral reform is due.

“We’re facing what’s looking like five more years of savage austerity. There are all alternatives and Brighton Pavilion has shown that people will vote for it.”

Speaking after the declaration, she said: “Here in Brighton Pavilion we ran a really positive campaign and I think that’s been reflected in the result here tonight.

“Nearly a million people voted Green across the country. We came a good second in four seats.”

Purna Sen, the Labour candidate came second with 14,904 votes and Clarence Mitchell for the Conservatives polled 12,448 votes in third place.

The other candidates were Nigel Carter, UKIP, with 2,724 votes, Chris Bowers, Liberal Democrat, with 1,525, Nick Yeomans, Independent, with 116, and Howard Pilott, Socialist Party of Great Britain, with 88.