A Brighton sea swimmer who this morning attempted the earliest – and therefore coldest- channel crossing yet has had to abandon his mission this morning after becoming disorientated. 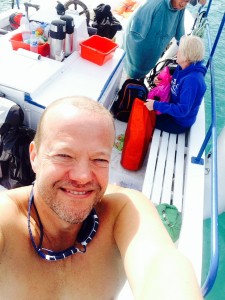 Simon Cooke, who is raising money for local disabled children’s charity Amaze, set off from Samphire Hoe beach at 4.30am this morning.

But five hours in, Andy King, the skipper of the boat accompanying him decided to halt the swim as it was too dangerous.

A spokeswoman for Amaze said: “Simon became disorientated due to the cold. The water is very much colder than it has been in May in previous years so achieving the world record was always going to be a massive challenge.

“Simon is Amaze’s hero regardless. He has raised such a lot of money and awareness of our charity that we hope this softens the blow a little for him as we are sure he is feeling very disappointed.”

Simon is currently on his way back to Dover and will be releasing a statement later.

The swim received a lot of media coverage, including an interview with the BBC which was filmed on Friday, May 22.

While filming it on Brighton beach, Simon and his trainer Fiona Southwell spotted a swimmer in trouble.

They raised the alarm and then Simon swam out to her and brought him back safely to shore where he was resuscitated and rushed to hospital.

The current holder of the record for the earliest crossing is Kevin Murphy who achieved it on the 29 May.

The main risk in crossing so early is hypothermia as the water is still very cold (as low as 10 degrees). The wind and tides are a factor as is the sun. Things like jellyfish schools are unpredictable.

Simon was also dealing with some pain in his shoulder after rescuing the swimmer last Friday.

There has been a lot of controversy about the swim. The British and French port authorities considered stopping it in case something went wrong.