A plan to build flats and offices on the site of a derelict ice rink in Brighton have been thrown out by a planning inspector.

Stonehurst Estates wanted to demolish the old ice rink – empty since 2003 – and a neighbouring property in Queen Square, Brighton.

In their place the company wanted to put up a five-storey building containing 31 flats plus offices.

But the plans, which were submitted to Brighton and Hove City Council in November 2013, were turned down by the council’s Planning Committee last October. 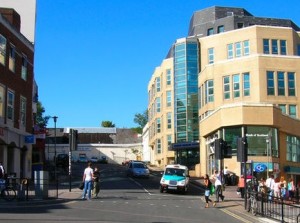 Stonehurst, based in Jermyn Street, London, then appealed against the committee’s refusal.

Planning inspector David Prentis said: “The main issues are the effects of the proposal on the settings of heritage assets and on the living conditions of nearby residents.”

The heritage assets included St Nicholas Church, which is more than 900 years old, and homes in nearby Wykeham Terrace, which are nearly 200 years old.

Mr Prentis said: “The proposal would be harmful to the significance of the listed church, the listed terrace and the conservation area.

“These are matters to which I attach considerable importance and weight.

“I note that the appeal scheme would bring benefits in that it would deliver housing, including affordable housing, secure the redevelopment of a derelict site and improve the appearance of Queen Square.

“However, I see no reason to think that similar benefits could not be achieved with a design which did not have the adverse impacts I have identified.

“On balance, the benefits would not outweigh the harm to the significance of the heritage assets in question.”

He turned down the appeal.