A Hove artist has used pinhole photography to track the sun passing over the city’s landmarks over a series of months. 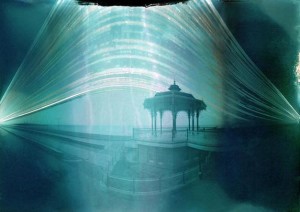 Nick Sayers made his cameras from scrap aluminium cans and installed them between the summer and winter solstice at a range of locations in Brighton and Hove.

The resulting ghostly images show the daily tracks of the sun as a ribbon of lights across the sky, sometimes broken up by occasional cloud cover.

Nick said: “I got the bug for taking these ‘solargraph’ images from a workshop with photographer Justin Quinnell at Maker Faire UK 2011, where I was exhibiting my recycled artwork.

“My art has always dealt with the connection between creativity, science and recycling, so I love how this simple photographic process produces such magical results, revealing the changing seasons and planetary alignment.

“Since learning this process I’ve been out every summer and winter solstice, installing and taking down cameras when the sun is at its highest and lowest point.” 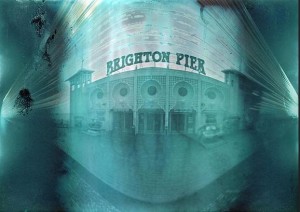 “I usually get permission to install these cameras, such as on Brighton Pier. Other times I go guerrilla and just hope no-one notices they’re there!

“No people are recorded in the photos as the exposure time is so long, but in an age of instantaneous digital photography, people often don’t readily understand this.”

Shown as part of last month’s Brighton Fringe, an exhibition of these photos – available for sale – has been extended until the end of July at Redroaster coffeehouse in Kemptown (1d St James’s Street, Brighton BN2 1RE).

And Nick is also hosting a workshop on how to make pinhole solargraph cameras at Redroaster on Saturday 20 June (solstice eve) at 7.45pm.

Tickets for adults and children (10 years up) are £8, which includes all materials. Please register at http://nicksayers.eventbrite.com.