Fewer 25 to 29-year-old women come forward for cervical screening in Brighton and Hove than anywhere else in Sussex and Surrey, according to the NHS.

The proportion of women aged 25 to 29 years old who go for their smear test is 59.6 per cent in Brighton and Hove. The target is 80 per cent.

NHS England said that the figure for Surrey was 65.9 per cent, for West Sussex it was 69.2 per cent and for Hastings and Rother it was 69.8 per cent.

In the rest of East Sussex – the East Sussex Downs and Weald area – the figure was 70.7 per cent.

NHS England said: “Cervical cancer is the most common form of cancer in women under 35 years and NHS England is calling on young women in Surrey and Sussex to be screened as an early diagnosis significantly increases the chances to combat the disease. 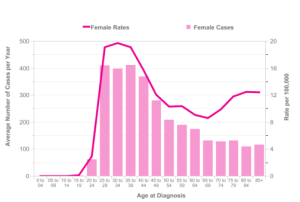 “National statistics show that the number of women aged 25 to 29 years being screened for cervical cancer is the lowest in any age group and we are now seeing a rise in the incidence of cervical cancer for this age group.”

Most women who had cervical cancer diagnosed had delayed their screening which affected their ability to have early treatment.

Dr Max Kammerling, a consultant in public health medicine and the screening and immunisation lead for Public Health England (Surrey and Sussex), said: “Many young women don’t understand the importance of attending their first screen when invited around their 25th birthday.

“The cervical screening test, often called a ‘smear test’, is a relatively simple procedure performed by the practice nurse at your GP surgery which takes about 10 minutes.

“Ninety-five per cent of results will be normal. The small number of results which are not normal can be treated very easily.

“Getting women to attend their first invitation is key to ensuring regular attendance across their screening lifetime.

“We strongly recommend women in Surry and Sussex, especially those aged 25 to 29, to get a cervical smear test when they are called.”

NHS England said: “The number of women dying from cervical cancer has halved over the past 27 years as a result of the NHS screening programme as well as improvement in treatment.

“Despite this success, Cancer Research UK studies indicate that over 3,000 women are still diagnosed with cervical cancer each year, which is more than eight women every day. It is also the most common cancer in women under 35 years.

“In the south east almost 66 per cent of cervical cancers were diagnosed in women under the age of 50.

“The NHS screening programme aims to screen 80 per cent of the target population to offer the greatest protection against cervical cancer.

“In a number of GP practices across Surrey and Sussex coverage is less than 70 per cent for 25 to 29 year olds and in some practices even lower.

“This organisation aims to raise awareness of the importance of cervical screening and its role in preventing cancer, as well as encouraging women to go for their screening test when invited.

“The team is also working closely with their local GP practices to increase awareness and the uptake rates of cervical screening within the Surrey and Sussex areas.”

The chief executive of Jo’s Cervical Cancer Trust, Robert Music, said: “Every day we see the devastating impact a cervical cancer diagnosis has on women and their family and friends.

“For those who were diagnosed after delaying their routine screening, knowing that cervical cancer could have been prevented is tragic.

“Cervical Screening Awareness Week – last week – was a great opportunity to remind all eligible women, especially those invited for their first test, to be aware of the importance of cervical screenings.

“It’s a five-minute test that could save their life.”

Cancer Research UK said: “Over the last 20 years the incidence of cervical cancer in England has decreased by a third while deaths have more than halved.

“This is largely due to cervical screening and improvements in treatment.

“Incidence of cervical cancer has increased in young women over the last 10 years and is now the highest in 25 to 29 year olds, surpassing that of older women, which has fallen significantly over the same period.

“Focus on getting women to attend their first invitation is key to ensuring regular attendance across their screening lifetime.

“Coverage has fallen most significantly in women aged 25 to 29 over the past five years.

“In a number of local GP practices coverage is less than the 70 per cent minimum national standard, with some GP practices having rates as low as 55 per cent for this age group.”

Roberts returns to Brighton and Hove Albion as goalkeeping coach