The 28-year-old has become the club’s second signing in as many days after he agreed a three-year deal for an undisclosed fee.

Hemed joins from Almeria – the same club that Albion bought Leo Ulloa from in January 2013.

Manager Chris Hughton said: “Tomer is someone I have been aware of for a few years and someone I watched a lot during my time at Norwich City. 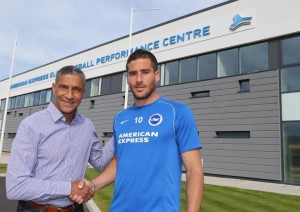 “It was encouraging that when I first came to Brighton, Tomer was a player who Paul Winstanley and the club’s recruitment team were also aware of, and we have been working towards bringing him to the club since the start of the year.

“It’s been another great team effort from all key areas of the club to secure Tomer’s signature and we are delighted to have completed the transfer and we welcome him to Brighton.

“Tomer is 6ft tall, strong and he has played much of his football in La Liga and at international level. He is very capable of scoring goals.

“It’s another significant signing for us. I have no doubts about Tomer adapting to Championship football and improving our attacking threat.”

Hemed has spent three of the past four seasons playing in La Liga with Mallorca and Almeria, scoring 27 goals in 72 starts in Spain’s top division during that time.

He has also scored 10 goals for Israel in 15 senior international appearances since 2011, having represented his country at every level.

In the past five seasons, at both club and international level, Hemed has scored 52 goals from 121 starts.