A Brighton street has been closed this lunchtime while emergency services respond to reports someone was trapped in a basement fire. 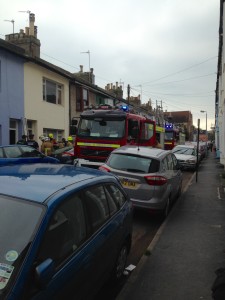 Firefighters, paramedics and police officers are currently in Coleman Street, Hanover after 999 calls were made at 12.43pm today.

Breathing apparatus has been used by firefighters entering the flat, and although the street is still open to pedestrians, police are warning people not to get too close as it’s not yet clear exactly what’s happening.

A spokesman for East Sussex Fire and Rescue Service said firefighters were called to reports of a fire in Coleman Street, Brighton this afternoon.

She said: “Three appliances from Roedean and Preston Circus were mobilised to the incident at 12.43pm.

“The incident has been confirmed as accidental involving a cooker. One person was rescued from the scene and all persons were accounted for. Crews left the scene at 1.45pm.”

A police spokesman said: “Police were called to an address in Coleman Street, Brighton at around 12.45pm on Monday (12 October) following a report fire could be seen in a nearby house.

“There are no reports of injuries at this time.”

Mum Samantha Dawes said: “I was just leaving my son’s nursery, and we could smell burning. It wasn’t food, more of a chemical smell, like formica.”