A group of students are being evicted from a house they rented in the middle of their finals exams after the landlord was told to convert it back into a family home. 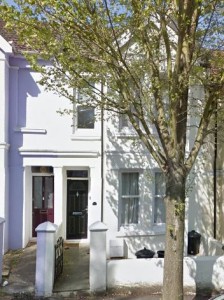 Mr and Mrs Donald Rayward appealed last year and were told by a planning inspector in June that if they continued to let 17 Bernard Road as a house of multiple occupation, they would face prosecution.

But despite this, it was advertised by G4 Lets in January, and a group of seven students moved in last month, unaware of the enforcement notice, which comes into force in December.

One of the third-year students, Georgia Fleet, said: “We were completely unaware of everything going on, and we were also told there were no noise complaints from previous years from this house.

“We worked so hard to find a seven bedroom house which was nice which we could all live in as we’re all very close and very good friends, and we had this house sorted out since January this year!

“Only 30% of students at the University of Brighton get halls, so basically everyone (even first years) are forced into housing and are forced into the awfulness that is student landlords.

“We had such a horrible year last year with our landlords, and now this. AND to make things worse, in the middle of our exams is when we will be being evicted.

“G4Lets have completely ruined our year and the stress we are now under is immense. We’re not the only students in this situation, and I dread to think how many of us are being evicted.

“We don’t mean to be loud and noisy, we only had a moving in party, we tried to let everyone in the surrounding houses know about it way in advance, we really did try our best.

“We have no plans to have any other parties, if you saw our house inside it is clean, we are not horrible people and are certainly not threatening ‘gangs’ roaming the street.

“I’m sorry the students before us obviously caused havoc, but with no student halls, and now no houses, where are we supposed to go?”

Ms Fleet subsequently contacted us to say she had been told the situation was a misunderstanding between G4 Lets and the council, but the lettings agency and the landlord were unequivocally told by the planning inspector that they should not let it out again six months after her ruling in June this year.

In her ruling, she said: “The [landlords] consider that the compliance period of six months [from August 2014] is not long  enough as the house is let on an assured shorthold tenancy that ends in June 2015.

“Due to the length of the appeal process, this date has now been reached  and it would be a reasonable assumption that the property has not been re-let past this date, given the uncertainty about the legality of the current use.

“I therefore consider that six months is a reasonable period to comply with the enforcement notice.”

G4 Lets was approached for comment, but had not responded by the time of publication.

Ward councillor Emma Daniel said: “That’s disgraceful behaviour by the owner and its communities and tenants paying for this level of irresponsibility.

“This market urgently needs regulation and we need more powers to be able to tackle it. I hope their university are able to support them but as ward residents they are welcome to contact me if they can’t get the help they need.”