A controversial loan to keep the company running Brighton’s Open Market afloat has been agreed in principle this evening. 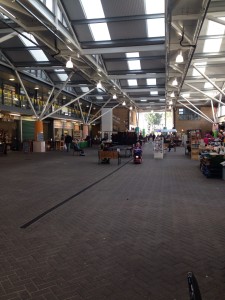 A raft of concerns on how the market has been run to date were aired, including criticism of its management by the Ethical Property Company (EPC) and traders being left in the dark.

Members of Brighton and Hove City Council’s Policy and Resources Committee also expressed concern as to how effective the proposed recovery plan would be.

But with the prospect of the market closing if the Open Market Community Interest Company goes bust, putting dozens of jobs at risk, officers were given the go-ahead to grant the loan.

Councillor Kevin Allen addressed the committee in his role as interim chair of the CIC board, warning them: “A lot of livelihoods are at stake and the regeneration of London Road.

He also said the performance of EPC in managing the market “leaves a lot to be desired”.

He said that the company AGM last week had been “cathartic” and a good start to improving the market.

“We need to involve traders above all. We need better marketing,” he said. “We need to recruit independent directors with business, accountancy and marketing skills. Bear down on management costs.

“The options are in front of you. You can let it go into insolvency and council take it over.

“If the council has the odd million going spare, maybe, but … I think it’s option a, to grant the loan, and I do plead with councillors to go with that.”

The council’s projects officer Richard Davies told the meeting: “There’s an immediate danger that without the loan the market may have to close due to the insolvency of the CIC.”

But he said the request for the loan is underpinned by a recovery plan which addresses the market’s cash flow difficulties until it moves into profit.

The plan includes amending planning and lease restrictions to allow deliveries on Sundays. The council has also offered hardship relief for non-domestic rates.

There will be more focus on themed markets, which has already started with the introduction of Street Diner on Wednesdays, which ties in with a new citywide market policy which will aim to drive new markets, themed markets, visiting markets into the open market square.

EPC is to review its staffing fees, new independent directors are to be recruited and appropriate consultants hired.

Labour’s Councillor Tom Bewick moved an amendment that officers ensure that business advice is sought and implemented in actioning the recovery plan and that a monitoring report is brought back to councillors by the end of the financial municipal year.

Both Green and Conservative councillors expressed doubts over how effective the recovery plan is, with vague financial details and questions over the high interest rate being paid on an existing major loan.

Councillor Ollie Sykes, a Green, said: “There are these killer assumptions around the changes to planning, lease and business rates. If they don’t come right, this may not work out.

“Do we have any idea of the level of risk associated? I think we should support but we need more assurances.”

And Councillor Andrew Wealls, a Conservative, said: “It seems to me that as a model it’s incredibly dangerous. If I were an investor I wouldn’t invest in this project and certainly not without any financial information whatsoever. I’m going to abstain.”

Conservative Cllr Ann Norman said more needed to be done to attract shoppers. She said: “I’d like to speak as a shopper and someone who used to shop at the old market which was unhygienic but it was popular.

“The new market is certainly clean and hygienic but more shoppers are needed in there. It’s desperate to increase the footfall.

“Is money the only solution? I feel that more needs to be done not necessarily by the traders who are going over and above their remit but I believe that something needs to be done to improve the atmosphere and more.”

But Abraham Ghebre-Ghiorghis said officers would only go ahead and grant the loan if they were confident that plans to improve the market were going to work.

He said: “What you’re deciding today is whether or not to give officers delegated authority – as part of that due diligence and risk assessment and officers would only give it once they’re satisfied the market is viable.”