Councillors press ahead with cuts plans in face of protests

A heated council meeting ended with councillors voting to progress plans to slash services, including the closure of the Tower House Day Centre and the outsourcing of accommodation for learning disabled adults. 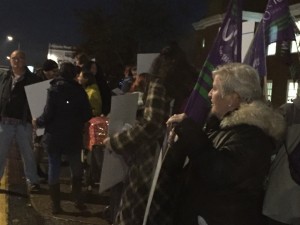 A Unison union protest was held this evening outside Portslade Town Hall ahead of a special meeting of the city council’s policy and resources committee.

And inside, councillors continued the angry exchange of words, with barbs thrown across the room from both sides.

The Tower House closure was the subject of the most debate, with concerns that moving users to voluntary sector services would involve breaking up longstanding friendships.

The Green’s Cllr Phelim Mac Cafferty said: “We have no sense of whether services [in the voluntary sector] have capacity for Tower House users and I’m not satisfied there will be anywhere for them to go.

“Many of the users using the service have formed strong friendships, and we’ll essentially be breaking up relationships. People may dip into depression and become lonely and isolated. It seems to me we haven’t explored the options.”

And Conservative Cllr Joe Miller questioned how popular the centre was. He said: “The report insinuates that they can’t get enough clients but I understand the management has been told not to accept any more clients.

“If some of the users decide not to take a personal budget or go to another day centre, then effectively we could see service pressures moved onto other areas of adult services. For instance, there’s a bath there which I know lots of people who don’t have a home service currently use.

“Could we potentially use the site, which I understand is currently unused on weekends and evenings, to cross subsidise the day centre?”

The council’s executive director of adult services Denise d’Souza, who made the recommendations and once managed the centre herself, said that while there wasn’t a blanket no to people being sent there, there was a “rigorous process” in deciding whether it was cost effective.

She also said that discrepancies in the total cost of running the centre compared to the stated daily cost per user were down to contributions being made and users not always turning up.

And she added: “We will want to make sure we do everything we can to support carers because the last thing I want to see is the costs coming elsewhere in the system.”

“We will try to keep friendship groups together. What we asking today is to begin a three month period of consultation with a report coming back to policy and resources.

“Some people chose to do activities in the community and those are the options we’d like to support going forward.”

Tory Cllr Ken Norman was more supportive of the proposals. He said: “I’ve always thought that we should keep one provision for day services going for however long we could but at the same time I’ve always realised it’s not necessarily the case that we can or would want to keep them going.

“What we want to do for our residents is to make sure they can have that in the best form and place available for them. That doesn’t necessarily mean people need to gather in the same place every week. There are other ways to do it.”

Labour’s Cllr Les Hamilton rose the prospect that the day centre could continue, but run by someone else: “I do hope that looking to see that someone else will run it at a peppercorn rent in the same building is worth exploring.”

The proposal was approved, but with amendments to add keeping the centre open as an option to the consultation, exploring whether weekend and evening use could cross-subsidise the service and ensuring the voluntary sector had adequate capacity to help displaced users.

The proposal to consult on outsourcing accommodation for adults with learning disabilities was voted through without change after a Green amendment to keep the service in-house failed to attract any support from Labour or Conservative councillors.

Cllr Mac Cafferty asked: “Is it enabling people to live more independently, or is it forcing relocation of people against their will? The fact that it could be the latter is of considerable concern. Some of these people have been in these homes for years.”

And another report which approved officers coming up with yet more cuts to keep services running on budget was also approved, despite angry exchanges between the parties.

Both the Greens and Tories accused Labour of scaremongering when it warned the council could go bust in two years if cuts aren’t made.

Cllr Ann Norman said: “I cannot see any sense in scaremongering. You tell the truth. I think everyone knows there are financial difficulties and we have to look at how to provide services. I can’t see there’s any sense into frightening our residents into something that isn’t going to happen.”

Cllr Ollie Sykes said: “The thing is with scaremongering is that it leads to acceptance to an emergency response which gives a danger of giving carte blanche to whatever.”

But Labour Cllr Tom Bewick stood by his comments. He said: “Given what we’ve heard tonight from members of the public who are at the receiving end of a Tory Government as callous, immoral and wicked when it comes to investment in its services I find it a bit rich that we had a chancellor that the country would go bust if it elected a Labour government. And yet here we are six months later having to deal with consequences of a Tory government.

“Here in Brighton we’ve been doubly stitched up not only by Tory government but also by a Green administration which has stuck its head in the sand for four years.”

And Cllr Mac Cafferty hit out at the short notice for the meeting, saying: “We’ve only had three working days to see the contents which is contrary to convention and there was no pre-meet either which is totally unfair.

“Now we’re finding out what you’ve tried to hide. We got two hidden, really sensitive reports on the care of some of the most vulnerable people in our city.”

But Labour’s Gill Mitchell responded: “There’s a lot of huffing and a lot of stamping. But we have put this paper before you to give you early sight of the work which has been undertaken to reduce this overspend.”