A petition started by the Brighton and Hove No More Page 3 campaign has unleashed a vicious backlash on Twitter. 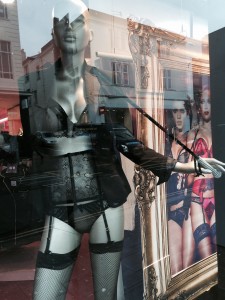 The petition is calling on Ann Summers to take down a window display which features riding crops and leather at their Brighton store in Western Road.

But although the number of signatures has more than doubled to almost 300, its creator Jess Woodfall has found herself subjected to a deluge of insults online.

Some of the milder slurs include being a petty authoritarian, funsponge, feminazi and someone said they hoped Ann Summers used her complaint for “wiping purposes”.

But Jess, who since our original article has appeared on two BBC radio shows, said: “It’s indicative of a group of people who don’t like change… Also that they can’t read. The very first word in the petition is ‘ask’. I haven’t called for a ban or for legislation.”

Ann Summers told Brighton and Hove News they believe the campaign portrays a positive message as it empowers and encourages women to feel sexually confident.