A new public staircase to Brighton Station which has shaved minutes off commuters journeys has been greeted with excitement. 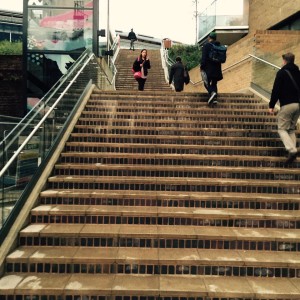 The steps are part of a new public square, station link and extension to the public greenway in the New England Quarter, and the final part of the area’s major regeneration.

Built by Hyde New Homes, they stood tantalisingly close to completion and yet unopened for months.

But a couple of weeks ago, they finally opened to the public, to the delight of hundreds of commuters living nearby who now get an extra few minutes in bed in the morning.

And for those with mobility problems or needing to take luggage or buggies to the station, the lift is set to be open shortly too.

One commuter, posting on the Hanover Community Noticeboard on Facebook, said: “love them SO much! It’s the best thing this town has built in years!”

Another said: ” I used these for the first time this morning. I can confirm they do live up to the hype – it’s like my feet were borne on the backs of angels!”

And a third said: “So cool – I can literally walk home as the crow flies.”

Following the go ahead from Brighton and Hove Council, Barratt Developments and Crest Nicholson developed hundreds of new homes in the first two phases, while the final phase saw Hyde New Homes deliver Super B, providing 147 new homes, including a range of much needed shared ownership homes to help first time buyers take their steps onto the property ladder in Brighton.

Tow Shaw, Hyde’s Development Director (South) said:  “We apologise for the delay to the opening of the square and station link. However, we are pleased that the whole community can now benefit from a new pedestrian link to the station.

“There is a small issue with the public lift which we will resolve shortly, so it’s up and running.”

He added: “Hyde’s approach to development is about much more than simply building new homes. Our aim is to create vibrant and successful, places and communities where people want to live.

“At Super B, we have invested in a new station link and lift, giving pedestrians access through the back of the station, and creating a pleasant, landscaped greenway which links the lower part of the scheme on Fleet Street to Stroudley Place and the entrance to the station.”

The new station link and public realm improvements have been funded by Hyde New Homes through the Section 106 Agreement signed with Brighton and Hove City Council when planning permission for the development was granted.