Trustees who stepped down from managing the Saltdean Community Centre said they were left shocked when their successors immediately announced it could close in just six weeks. 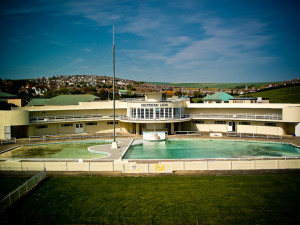 Saltdean Lido taken in 2003 by John Shepherd on Flickr

The announcement at the AGM of the Saltdean Community Association (SCA) last Wednesday has left groups which use the centre unsure of their future.

The SCA has been leasing the centre, which also houses Saltdean Library on behalf of Brighton and Hove City Council, on a year-by-year basis as the freehold is due to be handed to the Saltdean Lido CIC once it has the funds in place.

But this has been delayed by a standoff between the council and the CIC over who should pay to replace a missing electricity substation.

Meanwhile, the new management says it will be explaining the reasons behind the possible closure next week after it has gone through the association’s finances.

The announcement was made by new SCA chair Cathy Gallagher just after she was elected to the post, replacing Liz Lee.

Mrs Gallagher said: “What the trustees are doing at the moment is assessing the finances and the situation regarding the lease for the SCA part of the building.”

“If the results preclude the trustees from renewing the lease, whether the Community Lido stays open or not will be a decision for the freeholder, Brighton and Hove City Council.”

One SCA member who attended the AGM said: “The old committee have been keeping the building going on annual lease for the last three years and it’s due to be renegotiated with the council very shortly as it runs out on 3 December.

“Cathy said she was not convinced that the centre was fit for purpose and that it’s highly likely that they would not be renegotiating the lease to keep the centre going.

“She seems to want the charity to continue but not the community centre.

“About 200 people a week currently use the centre for groups like a dance academy, fitness classes, the Saltdean Choir and a yoga group. The vast majority are OAPs.

“There’s no other obvious hub in Saltdean and I’m sad that Cathy appears to have made up her mind.”

Outgoing treasurer Lesley Jeavons, who also runs a Body Boost fitness class at the centre, said: “The SCA was set up as a charity 50-odd years ago and although it’s not necessarily tied to the building, it pretty much has existed to manage the building.

“I wouldn’t have stood down if I had known that they were intending on closing it. Nobody knows the next step.”

The SCA is a registered charity whose published aims are “to establish or secure the establishment of a community centre for residents of Saltdean and neighbourhood and to include an effort to advance education and to provide facilities in the interest of social welfare for recreation and leisure time occupation with the object of improving conditions of life for the said inhabitants.”

Director of Saltdean Lido CIC Rebecca Crook said: “The SCA has a temporary lease and the CIC will take on the lido as vacant possession when we are ready with the funds in place to refurbish the building. Any announcement about the community centre closing down is between the voluntary organisation and BHCC.

“Obviously it’s disappointing because many local residents rely on the facilities at the community centre so we therefore urgently hope we can get the project back on track to expedite the refurbishment works for the benefit of the local community.”

A spokeswoman for Brighton and Hove City Council said: “Saltdean CIC and the community centre are two separate entities, although there may be some crossover in terms of the individuals involved with both.

“We understand that the community centre people have asked the council to meet with them so once that meeting has taken place we should know more.”