Brighton’s most famous former waitress – Madame Cyn – has died at the age of 82.

Cynthia Payne – the Luncheon Vouchers madam – moved from her home town of Bognor to work as a waitress in Brighton in her teens. 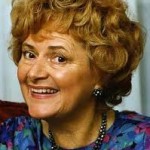 Her life at the time was dramatised in the 1987 film Wish You Were Here, starring Emily Lloyd and Tom Bell.

She was also the subject of another 1987 film – Personal Services – starring Julie Walters.

The films came out at about the same time as the second of two high-profile court cases after police raids on her home in Streatham.

Middle aged and elderly men were reported to have been queuing up at her suburban south London home to exchange Luncheon Vouchers – think Nectar points – for a striptease or sex. Her clients, she boasted, were respectable men such as vicars, lawyers, MPs and lords.

She earned fame – or notoriety – after the police raided her home in 1978. As a result she was jailed for 18 months, reduced on appeal to six months. In the event, she served four months in Holloway.

When she came out prison, she was a celebrity.

She later stood for Parliament twice – unsuccesfully – but when she was tried again in 1987 the jury acquitted her. 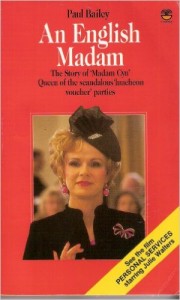 Politicians and the press condemned the Metropolitan Police for putting so much effort into busting a brothel when there were burglars, muggers, rapists and murderers wandering the streets of London.

Years later – in 2006 – she said when promoting a range of sex toys and saucy outfits: “These days I am still in demand but in a different way.

“In my thirties I was doing it, in my forties I was organising it and now, unfortunately, I can only talk about it.”