The newly opened Brighton BrewDog has followed its predecessors in falling foul of the council’s regulatory services – but this time it’s food hygiene not noise which has got the venue in trouble. 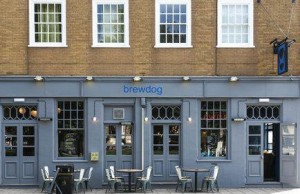 The craft brewers opened in Grand Parade in August, in a building formerly occupied by the Blind Tiger Club which said it was forced to close after the city council served a noise abatement notice on it.

And the new occupants have now also fallen foul of Brighton and Hove City Council inspectors, who have given it a hygiene rating of just one star.

The rating, published on the Scores on the Doors website, says it scored poor for hygiene and the inspector had little confidence in management, although its structural compliance was rated very good.

A spokesman for BrewDog said: “We are really working closely with the local authority to ensure we achieve a 5 star rating as soon as possible.”

The Blind Tiger Club said it was forced to close in May last year, after Brighton and Hove City Council served a noise abatement notice on it.

It started a petition calling for more protection for venues from people who move in next door to them, which was signed by thousands of people.

The council responded by saying complaints had been received from three streets away, and the noise was the worst its environmental officer had ever recorded.

No noise complaints have been received about BrewDog in its first few weeks of opening.

The Scottish brewery is no stranger to controversy, although it usually courts it with provocative marketing techniques, including selling a 55% strength beer in bottles encased by stuffed animals. Last month, it came under fire from the LGBT community for marketing a beer as “transgender”.

According to Wikipedia, BrewDog was challenged by UK drinks industry watchdog the Portman Group which claimed it was in breach of its code of practice, which BrewDog denied.

Eight months later, BrewDog was cleared and permitted to continue marketing their brands. Wikipedia say: “In protest to their targeting, BrewDog introduced “Speedball”, saying ‘…we thought we would give them something worth banning us for…’ . Speedball was promptly banned by Portman before being renamed as Dogma.”