A group of pupils from Portslade are off to visit one of the world’s leading science laboratories this morning (Thursday 3 December).

They won the trip to the European Organisation for Nuclear Research, known as CERN, as a prize for having the best school science club.

The four pupils from the Portslade Aldridge Community Academy (PACA) will meet leading physicists and engineers during their two-day visit to CERN in the Swiss city of Geneva.

The research centre operates the largest particle physics laboratory in the world and is the home of the Large Hadron Collider.

Scientists hope to use the Large Hadron Collider to recreate the “big bang” to find out what happened when the universe was created. 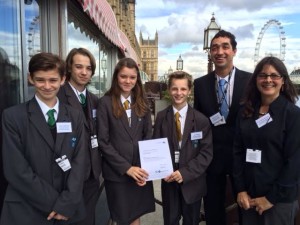 The Portslade students’ trip has been sponsored by the Science and Technology Facilities Council as a prize for winning the Best STEM Club of the Year. STEM is science, technology, engineering and mathematics.

Pupils from PACA were honoured at the annual STEMNET Awards held at the House of Lords in October.

Dr Caroline Oprandi, who manages PACA’s STEM Centre, said: “I am delighted to be taking these students who have worked so hard on STEM projects.”

One student said: “I love STEM. It makes me feel like a real scientist.”

Dr Oprandi said: “I am very lucky to be helping students to engage with the STEM subjects and bring science alive for them in ways never done before at PACA.”

Researchers from the Sussex University Physics and Astronomy Department who are currently over at CERN have also asked to meet up with the students while they are over there.

This year PACA’s STEM Centre also won the Coast to Capital STEM club of the year award and the Gatwick Electronics prize at the Regional Big Bang Show.

PACA was also a finalist at the TeenTech Awards held at the Royal Society.

The school’s STEM Centre is in the £12.7 million new building at PACA, in Chalky Road, Mile Oak.