Battling homelessness – one bag at a time

Businessman Mathew White set up the Rucksack Project because he wanted to do something without reward instead of getting caught up in the commercialism of Christmas.

The idea is simple – fill a rucksack with items listed on the project website or Facebook page and give it to a homeless person. No money changes hands, the project deals with donated goods (hat, gloves, scarf, sleeping bag, etc) often bought from charity shops.

Mr White explains how he had the idea: “As I came out of the underpass, I saw a stark image of a forlorn homeless guy. I did not speak to that guy but that afternoon I bought a rucksack. 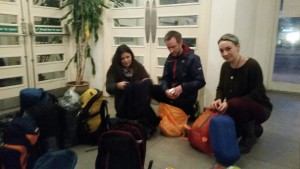 I went to the local YMCA in Nailsea, Bristol, and told them what I wanted to do. They were very generous with the pricing and a disabled lady paid for two fleeces. I paid £18 for two rucksacks (including the contents).

“The homeless man I saw before had gone but two others were there. I gave them the two rucksacks and they were so grateful. It’s nice to do something for charity but don’t brag about it.

“I set up the Facebook page that afternoon in November 2009 and 87 people liked my page, I was chuffed to bits, I thought I may get five likes. I never envisioned this.”

Over seven years, Mr White estimates that 100,000 rucksacks have been given out.

Mr White is concerned that big charities operate with a massive surplus and get away with it while people are dying on the streets. He said: “I really like working with smaller charities which gives them some exposure.”

Mr White’s next challenge is to raise £5,000 through Indiegogo’s crowd funding website within 60 days to develop an automated website with a database.

Indebted to the local organisers who are volunteers and to Facebook, he said he wants them to take the credit in their areas.

He said: “I’m not a celebrity. That’s ridiculous.”

Cassie Evans co-ordinated the project for Brighton and Hove on Facebook and held an event for people to drop off rucksacks on Saturday (12 December).

She said: “The rucksack project is a gentle social media nudge in the right direction, giving people the opportunity to do something. People generally want to help. They just need the means to do it.”

Ms Evans said that one homeless man cried because he was carrying all his things in plastic bags. He couldn’t believe the whole rucksack was for him.

Donor Claire Pimenta said: “I am really grateful to Cassie who has organised such a great event. It is nice for the stuff to go to a good home actually.”

Many people did not want publicity, they just wanted to give something to the homeless at Christmas.

Maria Garrett helped Ms Evans distribute the rucksacks and leads Opsafe Brighton which is a grassroots activist network. Ms Garrett puts together survival packs for the homeless and those most in need in society.

She said about the rucksacks: “People have put in poetry, cards, they have made things. People have gone out of their way to put in personal extras. All donations have come through our own community. That’s really beautiful.

“Social attitudes towards homelessness are changing. The campaigns are working. The government is not stepping up to the mark. The system is designed to fail so change has to come from within the local community.

“There is strict, statutory criteria about who the council can help. If you haven’t got a local connection, you don’t get any help.”

Ms Garrett was homeless herself from the age of 14 to 26 and said: “There is nothing good about being homeless.”

She wants to work together with others to eradicate rough sleeping all together.

Robin O’Fay, who is currently homeless, collected his rucksack on Sunday (13 December). He said: “The rucksack is brilliant. It has everything we need. Everything is useful – socks, hats, gloves, even the book. The new rucksack itself is very useful.”

Glen has been running a campaign to get himself off the streets by using Facebook, twitter and online crowd funding. He has raised £15,000 and has found a boat to buy in Menorca. He has now applied for a passport and is raising money for the mooring fees. He will stay in Menorca until he has paid the fees and then meet a friend in Barcelona who will help him sail the boat back to England.