A Brighton teenager is being hunted by police who want to return him to prison.

William Westein, 19, formerly of Theobald House, Blackman Street, Brighton, was jailed for 18 months when he appeared at Lewes Crown Court less than a fortnight ago on Friday 11 December.

He was part of a gang that stole 20 cars over four months until their arrest in the spring. 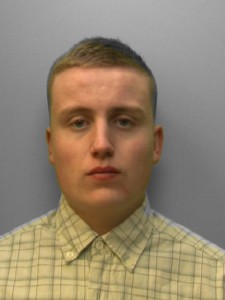 Although Westein was jailed, he was released the same day on licence from prison, having already spent nine months inside while on remand.

Sussex Police said today (Wednesday 23 December): “Since his release he has failed to comply with the terms of his prison licence which has been revoked as a result.

“And at the request of the probation service he is now subject to recall to prison.”

It is not the first time that police have had to track Westein down. In September last year the police helicopter and officers on the ground scoured the Moulsecoomb area looking for him. He was wanted for burglary and breaching a court order and a warrant was issued for his arrest.

Twelve days ago he was sentenced along with ten others for conspiracy to convert criminal property after a wave of car thefts.

The gang stole some of the cars after burgling the owners’ homes and taking their keys. In other cases they took cars from people’s driveways or from the street.

They sold seven of the cars, which have since been recovered, and sold any valuable goods left in the cars such as tools, mobile phones and computers.

Sussex Police asked for help tracing Westein who was described as white, about 5ft 8in tall and of medium build. He has blue eyes, short light brown hair and speaks with a local southern accent.

The force said: “He is known to frequent the Whitehawk and central areas of Brighton but is also believed to have links to the Lancing area.”

Anyone who sees Westein or knows of his whereabouts is asked to call Sussex Police on 101, email 101@sussex.pnn.police.uk or contact the independent charity Crimestoppers anonymously on 0800 555111.