RAF foils terrorist attack on Brighton, according to Sunday newspaper

The Royal Air Force has foiled a terrorist attack on Brighton, according to the Sunday Express.

The Sunday Express said: “The jihadist attacks were being planned in the week after the Paris massacre but the two foreign pilots, one of whom was flying for an airline on an intelligence service watchlist, were intercepted talking about the plot.

“Although they used coded messages from the cockpits of their passenger jets, the Arabic transcripts were passed to GCHQ where spies established they were talking about attacks on London, Bath, Brighton and Ipswich. 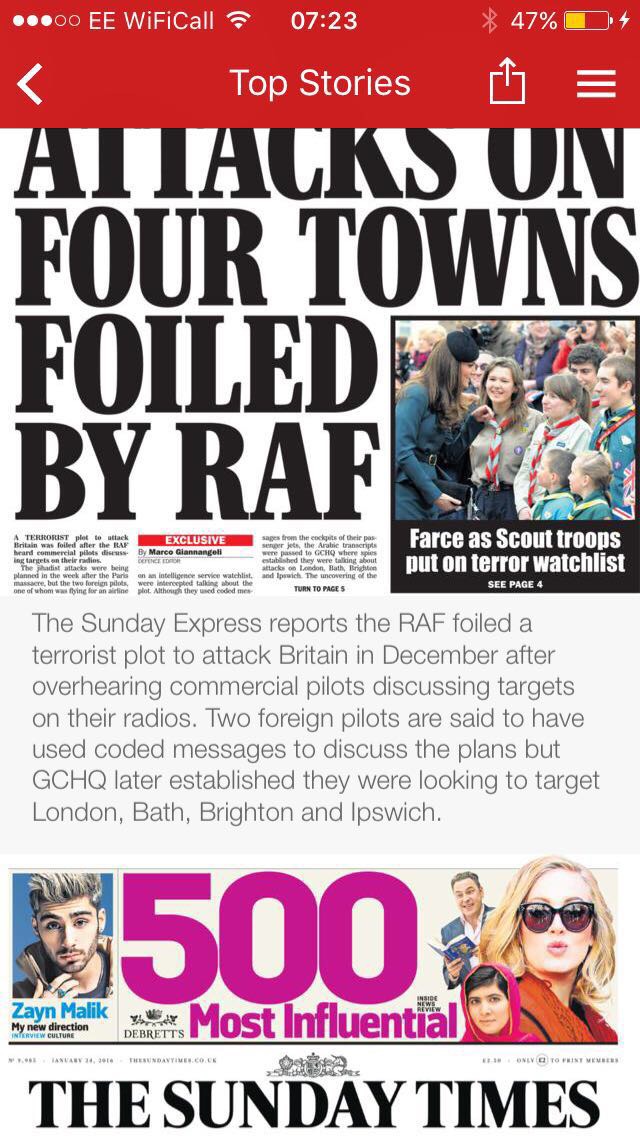 “The uncovering of the plan raised the terror alert in the UK and was one factor which led to Operation Templer, involving 10,000 soldiers being deployed to support police on Britain’s streets.

“The pilots, who were unknown to the authorities but believed to be sympathetic to Islamic State, were using the emergency ‘Mayday’ channel in the belief they were not being monitored.

“They coded their language with musical references, often referring to ‘hits’.

“The conversation included boasts that a song would ‘climb up the charts’ – a veiled reference to increases in jihadi recruits once the attacks had been launched.

“It is thought the pilots were preparing to smuggle in explosive devices or chemical weapons.

“The messages were intercepted as they flew from a European airport, thought to be Schiphol, in Amsterdan, to Middle Eastern destinations.

“They were unaware that Channel 121, the Mayday channel used to broadcast emergencies, was being monitored.

“It is believed that at least one of the airlines involved had already been placed on a UK aviation watchlist.

“The conversation was intercepted by RAF operators based at the National Air Traffic Services (NATS) Control Centre in Hampshire.

“Suspicions were raised and the recordings sent to GCHQ, in Cheltenham, where analysts took seven hours to decode the transmissions.

“The voices of both pilots were found to be ‘clean’ after being passed through a database of potential terrorists.

“This raised fears the pilots were part of an external IS ‘logistics team’ that might be personally flying in terrorists and devices to the UK.

“Neither aircraft was intercepted and the pilots were allowed to fly on to their destinations.

“It is not known where they are now but their identities are known to security services and it is understood they are now high-profile watchlist targets.

“The transcripts were seized upon by UK Counter Terror chiefs and led to the placing of 10,000 troops to support police on UK streets.

“The plot was uncovered in the days after the Paris attacks on (Friday) 13 November, in which 130 members of the public, including Briton Nick Alexander, were murdered in a series of attacks across the French capital.

“Last night a senior intelligence source said: ‘The areas we believed these attacks might take place were given extra surveillance. Troops were on several hours’ notice to deploy as part of Operation Templer.’

“’We can only assume that they considered it safer to use this frequency than other modes of communication.

“’We immediately passed these to the security services who then asked us to monitor certain airlines entering UK airspace.'”