Police in Brighton have released a CCTV image of a man they are trying to identify and interview about the rape of a woman in a flat in the city. 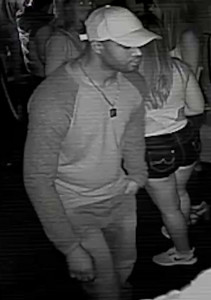 In the early hours of Sunday 13 September last year the 18-year old woman from Horsham woke up in a disorientated state, in an unknown flat close to Brighton railway station. She had been out in Brighton celebrating a friend’s birthday the night before. She was extremely distressed, left the flat and made her way home.

She had last been seen in Coalition Club on the Lower Esplanade shortly after midnight in the company of a man described as black, in his 20’s, approximately 6ft, and of muscular build with very short hair.

Detective Constable Melanie Wauchope said; “We are keen to identify and interview this man.

“We would also still like to trace and speak to a man and a woman who the victim stopped at about 5.30am that morning to ask for directions to the railway station, which was nearby.”

If you know who the man in the picture is, or if you were that couple, please contact us via 101@sussex.pnn.police.uk or call 101, quoting serial 309 of 13/09. You can also contact the independent charity Crimestoppers anonymously on 0800 555 111 (www.crimestoppers-org.uk).