Four Conservative MPs talked out the NHS Bill – a private member’s bill – introduced by the Green MP for Brighton Pavilion, Caroline Lucas, in the House of Commons yesterday (Friday 11 March).

The aim of the bill is to reverse recent changes to the NHS including the “creeping marketisation” of health care.

A big crowd turned out at Brighton Station at 7.30am to see her off with banners, placards and music from a samba band.

Sussex Defend the NHS said: “It really was a big, noisy, rambunctious send-off as Caroline Lucas left this morning for the House of Commons from Brighton Station.

“The samba band had a crowd of around 60 supporters jumping and that was at 7.45am on a cold Friday morning. 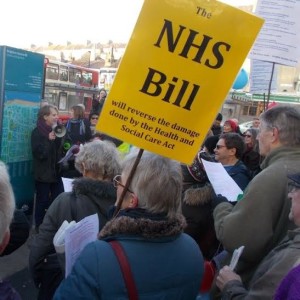 “Caroline Lucas was quite overwhelmed with the enthusiasm of the crowd, all the placards waiving and commuters pausing in their dashes for their trains.”

While thanking those who turned out to support her, she warned that the bill might well be “talked out” by MPs using “filibustering” tactics.

She said that this would be a long haul and if the bill was lost then she, along with SNP MPs, Labour MPs and others would continue the fight with another bill.

She was presented with a copy of the recent Brighton University research team’s report from the first Brighton Citizen’s Health Services Survey.

Campaigners said that it provided clear evidence that people in Brighton and Hove are strongly opposed to private companies taking over health services in the city.

Before everyone dispersed a pop-up choir sang a version of the Abba hit Waterloo with lyrics written for the occasion by a Sussex Defend the NHS supporter. 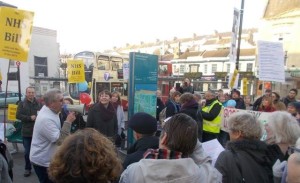 In the Commons debate – which was held up by filibustering until 2.13pm and ended at 2.30pm – she said: “It is an honour to have brought this bill to Parliament today.

“It is the result of widespread consultation and has extensive backing from a raft of doctors and nurses delivering frontline care as well as from local NHS campaign groups.

“Its backers include the British Medical Association council, the president of the Royal College of Paediatrics and Child Health and many local NHS staff and campaigners.

“I want to pay tribute to them all for their amazing work. I pay tribute, too, to Allyson Pollock, the professor of public health research and policy at Queen Mary University of London, and to Peter Roderick, a barrister and senior research fellow there, for their expertise and help.

“The incredibly positive and wide-ranging popular support for the bill reflects a strong belief in a publicly provided NHS.

“People are rightly worried because the NHS, consistently ranked one of the best in the world, is under threat like never before. 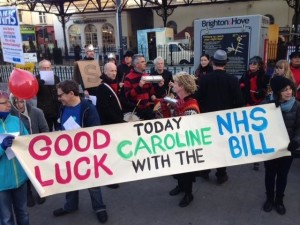 “The 1 per cent pay rise is frankly insulting. It is unsurprising that there is so much concern among NHS staff because it is not only about finances but about how they are being treated in general.

“We have a Health Secretary who constantly undermines their professionalism, helping to push our NHS into crisis.

“To see off the many threats facing our NHS, the bill is guided by the principles of the National Health Service Act 1946. It would reinstate the Secretary of State’s duty to provide services throughout England.

“It is time to put an end once and for all to the purchaser-provider split which is the harmful cornerstone of the commercialisation of our health service. It is the open door that lets the health corporations in to pick off the most profitable NHS contracts.

“The purchaser-provider split has allowed NHS privatisation in England to increase dramatically since the 2012 act.

“The most recent official figures show that the NHS paid £6.6 billion to private healthcare firms in 2013-14. Some have suggested that that figure has now increased to as much £10 billion.

“We need to tackle reorganisation head on. Some will argue that the NHS cannot face yet more reorganisation. I agree with that on one level but the alternative of carrying on down the current route is absolutely impossible.

“The bill is framed in such a way to ensure that reforms are implemented organically over time. Frankly, I do not think that we can do without it. 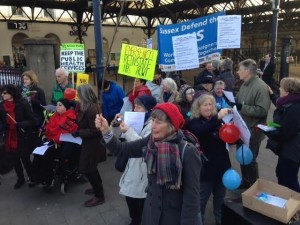 “We need a planned service, not one based on competition all the time. To those who say that the private sector is only a small part of our NHS, I make three important points.

“Secondly, there has been an undeniable escalation of private sector involvement since the Health and Social Care Act 2012 and the direction of travel is plain.

“Thirdly, material harm is being caused by the purchaser-provider split which puts competition above co-operation and sees NHS bodies literally bidding against each other and I simply cannot see whose interest that is in.

“I will say a little more about each of those points. On cherry-picking, the inescapable truth is that the private sector is camping out on the NHS’s lawn. It is using all the corporate machinery available to it to pick off the low-hanging fruit – the non-urgent, easy and profitable services.

“The 2012 act handed the private sector unprecedented access to NHS markets. Invited in to browse, it has predictably seized the simple, profitable work, sending complications back to the NHS to mop up any mistakes or unforeseen outcomes.

“It is just criminal that the money that the NHS so desperately needs to provide frontline care is going to line the pockets of private companies’ shareholders.

“The private sector is profiting from NHS training but it is depriving the NHS of income and removing valuable day-to-day training experience.

“Let us take the example of a surgeon who no longer gets to practise on scheduled elective work and who, as a result, has to refer an emergency shoulder injury to a specialist unit.

“It could have been dealt with at a lower level, but the experience and practice were lost.

“When it comes to the overall direction of travel and the duty to provide it is shocking that the private hospital share of NHS-funded patients grew rapidly between 2006 and 2011.

“First attendances for orthopaedics or trauma, such as broken limbs, also increased, yet it is the NHS that invests in training and picks up the pieces when things go wrong in the private sector, and it is the NHS that so often innovates.

“Following the coalition’s Health and Social Care Act 2012, the NHS Support Federation has been charting the impact of government policy on the use of outside providers to deliver and plan NHS care.

“Its report, which came out last month, charts the continuing steep escalation of creeping private sector involvement in the NHS. 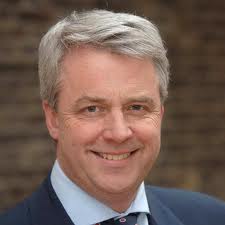 “Its research shows that more than 400 NHS clinical contracts, worth £16 billion, have been awarded through the market since April 2013.

“Over that time the private sector has won nearly £5.5 billion of them so let me give a few examples of the kind of corporate takeover that we are talking about.

“In September 2015 Capita, despite its chequered record in the provision of public services, took control of a contract worth £1 billion to be the provider of primary care services in England.

“As of April 2016 services including children’s specialist community nursing, health visiting and speech and language therapy will all transfer to Virgin Care.

“In my constituency, the private company Optum, part of the giant American corporation UnitedHealth, last year won a £1.5 million contract from Brighton and Hove CCG for referral management services.

“Such outsourcing goes on despite a trail of failed, terminated and collapsed contracts, such as the £235 million contract for provision of musculoskeletal services in West Sussex, which was awarded but never begun once it was determined just how much damage it would do to other NHS services in the region.

“Then there was the collapsed £800 million contract for Cambridgeshire and Peterborough older people’s services. There are estimates that the collapse of that contract has cost the local hospitals, GPs and community care providers about £20 million. 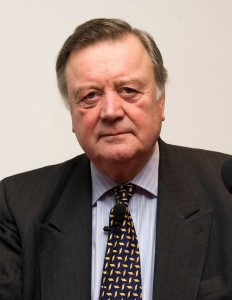 “There is a third example, of course – that of Circle, the private company running Hinchingbrooke hospital, which pulled out after just two years of a 10-year contract.

“That company’s announcement came just after the publication of a damning report on the hospital from the Care Quality Commission that raised serious concerns about care quality, management and the culture at the hospital.

“In the last moments that are left to me in this debate, I want to talk a little about how what is happening to our NHS, sadly, did not just happen with the 2012 Act. It goes back further than that.

“To protect the NHS for future generations, we need to recognise that there were several other stealthy acts of vandalism before that act.

“Margaret Thatcher’s government introduced the internal market right back in the 1990s. The right honourable and learned member for Rushcliffe (Ken Clarke) was in charge, following on from the so-called options for radical reform set out by the right honourable member for West Dorset (Oliver Letwin).

“In its 1997 manifesto, new Labour promised to end the Tory internal market but afterwards embedded it even further.

“On those foundations, the now Lord Lansley, Secretary of State for Health in the coalition, drove forward the Health and Social Care Act.

“Universal provision was replaced with commissioning for registered patients. Healthcare was thrown open to ‘any willing provider’ – hastily changed to ‘any qualified provider’.

“Shockingly, last October we learned that Lord Lansley has since been hired as a consultant to Bain and Company, which, according to its website, ‘helps leading healthcare companies work on the full spectrum of strategy, operations, organisation and mergers’.

“That appointment at Bain was signed off in July 2015 by Baroness Browning, who herself chairs the Advisory Committee on Business Appointments.”

At that point the debate was adjourned.