Brighton students living in “overpriced” housing have hit out at a letter sent by a city lettings agency urging landlords to sign up with them so they can hike their rents. 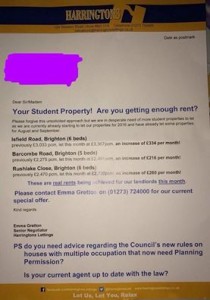 The letter, sent by senior negotiator Emma Gretton, said it had helped landlords put up rents by as much as £334 a month – although the agency later blamed this on Government changes to mortgage relief.

But the letter has provoked a storm of outrage from students, who say pushing landlords to rise rents even further when Brighton’s housing market is already overheated is immoral.

The letter, sent out last week, reads: “We are in desperate need of more student properties to let as we are currently already starting to let our properties for 2016.”

One Brighton student said: “”Its like targeting a robbery gang and telling them they’d extort more from the poor if they carried knives and hid behind an anonymous syndicate on 10% commission.

And another added: “They are frightened that greedy landlords will go to other agencies that will extort more rent from tenants. Brighton needs an ethical agent that looks after both the interests of the tenants and the landlords.

“Landlords get enough money from the increase in the price of the property over the years without making a killing on rents too.”

After the letter was posted on Facebook, an account in the name of Harrington’s Lettings replied: “We don’t have a large portfolio of student accommodation but we do have a few on our books and we appreciate there is a limit to what students can afford but there is also a limit on the minimum landlords need to make it viable for them.

“The market has dictated that rents have gone up dramatically, and our actions are in response to what the other student providers in town our telling us.

“Unfortunately the Government removing mortgage relief for landlords has put a lot of them in the position that they are unable to sustain their current rents.

“The only way they can keep their property is to put up rents or many will be forced to sell, reducing the number of properties available when there is already a shortage.”