RMT to meet Southern at ACAS

The RMT union is to meet Southern at the arbitration service ACAS over the 24-hour strike by train conductors which entered a second commuting day today (Wednesday 27 April).

The meeting will take place on Friday (29 April) with two other strikes in prospect if agreement about the “driver-only operation” of trains cannot be reached.

Train company Southern said that two in three services had run yesterday (Tuesday 26 April) despite the strike by conductors and that passengers who were delayed could claim compensation. 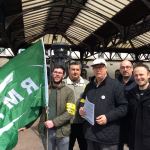 The 24-hour strike, called by the RMT union, had been expected to deter a significant number of passengers from travelling this morning (Wednesday 27 April).

For a second day, temporary barriers were in place at Brighton Station in case the number of people wanting to travel risked causing overcrowding on the concourse, platforms and trains. They proved unnecessary yesterday (Tuesday 26 April).

Last night the train operator said: “Southern would like to thank its passengers and those staff working today as it announced that two thirds of its services have run despite strike action by RMT conductors.

“Train services across the Southern network have been subject to disruption all day today and will be all day Wednesday 27 April as a result of the industrial action.

“Most trains have been running as normal to and from Brighton. However, some routes off the mainline have either been suspended or running with a reduced service.”

The line between Hove and Preston Park was closed, for example, which affected thousands of people’s journeys.

Southern added: “Services will be affected again from the start of service. Passengers are advised to check before they travel at www.southernrailway.com.”

Disruption is likely to last all day and be similar to yesterday, the company said, although it expected an improved evening service.

It also criticised the union line about safety being the reason for the strike, saying: “The RMT’s statements about the strike are deliberately misleading.

“The main focus of the new role (for conductors) on Southern is to be more visible and available to passengers. There will be as many trains staffed in future as they are today.

“We reject the scaremongering of the RMT on safety grounds. Driver-only operation is as safe as operating trains with conductors.

“It is a safe, proven way of working that has been working on 40 per cent of trains across the Southern network for 25 years.

“The Office of Rail and Road, the rail regulator for Great Britain, endorses the safe use of driver-only operation.

“The UK’s railways are now the safest in Europe and safer than any time in its history.

“The RMT has said it has ‘bent over backwards’ to resolve this dispute. The RMT has refused to engage with us through ACAS. We urge the union to enter discussions to avoid this unnecessary strike.

“This strike by the RMT is completely unnecessary and causes undue misery to our passengers.

“No staff would lose their jobs under our proposals or see a reduction in their salary while passengers would benefit by having more visible staff on trains.

“We urge the RMT to come back to the negotiating table.

“As many trains will be staffed as today – we simply want to evolve the role of our on board staff to make them more visible and available to passengers.

“In addition, services won’t be cancelled if an on-board supervisor is not available. That in itself – particularly in times of disruption – is a massive bonus for our passengers.

“Journeys will continue to be difficult and frustrating for our passengers. We hope to run as many trains as possible but on some routes there will be no train service at all and on others it will be significantly reduced and start late and finish earlier than usual.”

Southern said that it wanted “to evolve the conductor role into one of an on-board supervisor, who is more visible to more passengers, travelling on more parts of the network, delivering high-quality customer service and checking tickets”.

It added: “There would be as many trains running with staff on board as they do now but you will see more of them than you do now because they will have more time and opportunity to offer good quality customer service.

“Currently, conductors on our more modern trains have to be in certain parts of the train to close the doors – sometimes interrupting their time with a passenger.

“However, on these trains, there is no need to do this and the driver is able to operate the doors aided by modern CCTV systems, which gives them a clear view of every door on the train.”