A row of up to 20 hire vans parked in a Brighton street had their tyres slashed this week in an apparent act of revenge by a frustrated resident. 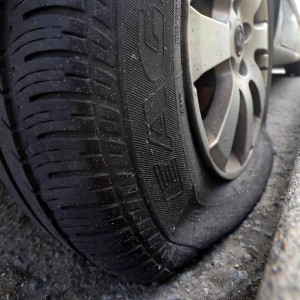 The vans, owned by Enterprise and Thifty car rental, had been parked in Carden Hill this week to the anger and dismay of residents, leaving a shortage of spaces and making it more difficult to cross the street.

Residents have publicly threatened to boycott both companies – but on Tuesday night someone went one step further and stabbed tyres on nearly all the vans.

Ironically, this means the vans will now take longer to move on.

The issue had already been raised with both rental companies by ward councillor Lee Wares. He said: “It is reluctantly accepted that with the law as it stands, vehicles for hire can be parked and stored on our streets. On Carden Hill in Hollingbury we have experienced a proliferation of such parking with this week up to 20 vans parked in rows on both sides.

“Being next to the community centre, school and retail estate, this puts huge pressure on parking. It also creates hazards for children, young adults and less mobile citizens crossing the road between closely parked, high-sided vehicles.

“It would be helpful if Thrifty and Enterprise Hire companies liaised with each other and cooperate to limited the number of vehicles they leave in the area and not burden the community with their activities.

“This has caused tension and frustration with residents and some have said they are boycotting the companies and will not use their services.

“However, on Tuesday night, nearly all the vehicles of both companies had their tyres slashed. This is an entirely unacceptable situation and I hope that those causing this criminal damage are brought to justice.

“Issues of this nature must be dealt with through co-operation and dialogue, not acts of criminality.”

Both Enterprise and Thrifty were approached for comment but had not responded at the time of publication.