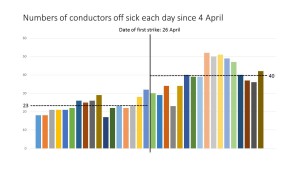 Members of the RMT have taken part in a series of strikes over plans to take conductors off new trains or refocusing their duties to issuing fines rather than safety.

Services on non-strike days since have often been hit by delays, which Southern has blamed on conductors taking days off sick.

Staff have taken to social media in the past few days to strongly deny the claims – which in turn has prompted Southern to release figures this afternoon.

The company says that in the last 32 days, there have been 1066 days of conductor absence, double the rate before the first strike on 26 April, and one in six have had a day’s sickness in the same period.

It says that on a daily basis, an average of 83 Southern services are being cancelled due to the current ongoing sickness problems.

A spokesman for the company said: “We would not usually release such information, but passengers deserve to know the reasons behind the unusually high level of train cancellations they are presently experiencing.

“For those conductors who are ill the company is offering all the support we are able to and working out how they can get back to work.

“But these figures show a remarkable and unprecedented level of sickness absence which commenced at the time of the first strike. We are presently looking into what steps can be taken to investigate this deterioration in the health of conductors across the south of England.”

The release came after RMT general secretary Mick Cash accused Southern of a “disgraceful campaign of misinformation” over the staffing crisis.

He said: “The blame for cancellations lies solely with GTR and is down to their continued mismanagement of this franchise.

“The hard fact is that this company does not employ enough staff to fill the rosters and is carrying significant levels of vacancies. They do that because it saves them money and allows them to pump up the profits which can then be shipped across the Channel to subsidise their operations in France.

“For Southern/GTR to try and turn the blame for this staffing crisis onto the union is ludicrous when the public can see clearly that the fault lies squarely with this penny-pinching outfit who will stop at nothing to fleece this franchise, and its passengers, for every penny that they can.

“Instead of ramping up the union bashing in the drive to milk this franchise for millions of pounds to subsidise their French operations at the expense of British fare payers, GTR should get round the table now for serious talks.”