A youth football club has abandoned training in Wild Park because of continued disruption from unauthorised traveller camps. 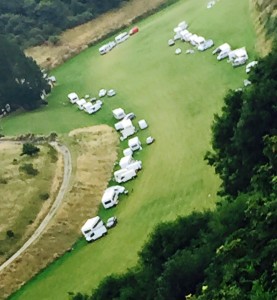 Kevin Tettersell, club secretary of Coldean Colts in Brighton, made the announcement this week, as another camp set up on the park.

And he has warned its young members’ subs may have to rise as it is looking to use privately run facilities instead.

Mr Tettersell said: “We’ve been continually interrupted over the past year by the constant upheaval of our sessions due to the travellers pitching up.

“We’ve not had any problems with the travellers directly, but there is often human faeces and fly tipping over the training ground.

“It’s quite demoralising not just for us, but everyone in the area.

“We are not a profit making club, we ‘re just trying to get the kids in the area out to play football.”

Scott Gibson from the Sama karate club, which uses the pavilion in Wild Park, said they had also had long-running issues with traveller camps.

He said: “The camps are sometimes very disruptive and people don’t want to come up. People turn away when they are there, and we lose money.

“There have been a couple of groups who have been fine and we have spoken to them and they move to the back. We speak to them and a lot of them are genuinely nice people.

“But we have also had racial abuse shouted at our instructors, our cars are tampered with, we have had faeces left on our doorstep. We are constantly phoning the police.

“Recently, once of the instructors came out and there were kids around the cars and they were throwing stones at the cars. One little kid brought a screwdriver out.

“And about six weeks ago, kids tried to grab one of the instructors when he was on his moped to get him off it. The police had to come and escort our students from the building into their cars because the travellers were causing trouble outside.

“During the summer months, it’s quite regular. Once one group is off, it will be two to three weeks and then there will be a camp back there again.”

However, both Mr Tettersell and Mr Gibson said that should public space protection orders (PSPOs) come into force in Wild Park and other open spaces in the city this summer, they hoped the park could return to consistent community use.

The results of a consultation into whether the council should impose these orders is due to be held by the council’s policy, resources and growth committee, possibly as early as next month.

It’s also hoped that the opening of the permanent Horsdean traveller site in June will help police be able to evict groups more speedily.

Both the council and police have visited the current camp in Wild Park, and are seeking to evict the group as soon as possible.