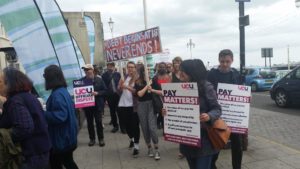 Striking Sussex University staff are threatening to disrupt exam marking tomorrow in a row over pay – but the university insists students will see no delays to getting their grades.

The University and College Union says exam boards in law, politics and sociology, business, management and economics, life science and psychology and global studies will be hit by the strike.

However, the university says that strikes notwithstanding, it is on schedule to publish all marks this Friday.

Three picket lines will be in place around the campus from 7am to 3pm, and UCU members will leaflet members of the university senate, asking them not to attend meetings.

It is also protesting the gender pay gap, which stands at an average of £6,103, and the number of staff on casual and zero-hour contracts, while the amount of cash put into national university reserves has risen 72% to more than £21bn since 2010.

University of Sussex UCU branch secretary, Tom Frost, said: “We are fighting for fair pay and taking a stand against the increasing use of insecure contracts which are undermining the academic role, and against the insidious pay inequality that sees many women earning less than men for the same work.”

UCU general secretary, Sally Hunt, said: “Universities need to recognise that staff will no longer accept their pay being held down while a few at the top enjoy the rewards of increased money for universities. Nobody wants to take industrial action, but clearly enough is enough.”

Members at Sussex are in the first wave of institutions that will take part in strike action aimed at disrupting open days, graduation ceremonies and key university processes meetings after union members voted to escalate their action earlier this month.

As well as walking out last month, UCU members have started working to contract, which means they will refuse to work overtime, set additional work, or undertake any voluntary duties like covering timetabled classes for absent colleagues.

The union has also called on external examiners to resign their positions on exam boards; a move which threatens to disrupt marking this summer when boards meet to discuss challenged marks. External examiners are a crucial part of quality assurance in universities, as each course requires an external examiner to ensure that an institution’s assessment is fair and comparable with others.

Professor Clare Mackie, Deputy Vice-Chancellor of the University of Sussex, said: “We strongly refute the union’s claim that the strike will impact the process for awarding degree marks. I’m disappointed to hear these allegations, as they may potentially cause concern for some of our students, at a time when they should be enjoying the pay-off from all their hard work and years of study.

“Our Module Boards met on Monday and have confirmed they have signed off marks for all of our final year students. Whilst there are some Progression Award Boards meeting this week, we have had it confirmed from each of our academic schools that we are on track to meet our usual schedule. We anticipate that exam results for all of our students will be published this Friday.

“External examiners do not sign off each student’s module mark. Over the year, external examiners contribute to the setting of assessments to ensure good learning outcomes for our students and to look at sample student work. This work was complete prior to the strike and all processes have been signed off.

“The university has good quality and robust processes in place for our exam and assessment procedures, and we are not aware of any issues at this time.”