Is this the document that proves Southern banned overtime?

A letter from a senior Southern manager telling supervisors not to authorise rest day working appears to prove claims that staff shortages are being exacerbated by a ban on overtime. 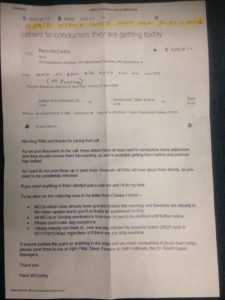 An angry member of staff approached Brighton and Hove News after Govia denied any overtime ban following claims made in a blog post by Sussex-based writer Dave Boyle based on discussions with station staff.

He said that although the ban had now been lifted, it had been put in place following the first of three strikes this spring by RMT members over safety concerns around the move to driver-only trains and the reworking of the conductor’s role.

And he provided this photograph of a printed email from Southern’s head of conductors and on-board Piero McCarthy, annotated by a Southern manager making it clear that rest day working (RDW) was to be banned.

The note says: “no RDW A/R only for no cover”. A/R stands for as required, which is a standard staffing measure whereby a bank of staff are rostered on to be on standby.

With recent staff shortages, standby staff have routinely been called into action to cover gaps, so a shortage of as required crew members has a significant knock-on effect on services.

In addition, staff have been banned from swapping shifts, which is commonly done to allow people to work around outside commitments such as childcare or be able to get to and from work in the early hours of the morning, and Southern has also cancelled the free transport passes given to staff and their families.

The member of staff said: “Traditionally on the railways you have a situation that there have always been people coming in on an as required basis so that if things go wrong they have sufficient crew available to cope.

“Over the last three years now the probability of anyone coming in remaining as required is virtually zero – they have been using us to fill vacancies through lack of recruitment.

“A ban on rest day working for as required is effectively a ban on overtime in order to cover staff shortages. This has since been rescinded but the fact is that GTR is denying that it ever happened.

They’re sheltered from any fines because of the contract they have with the government, which pays them a flat fee. And since February, the government’s given them an extra 9,000 trains they can cancel.

“They have just had two complete days of talks at ACAS, during which the RMT put forward a seven point plan and the company refused point blank to give consideration to any of those points.

“They have stated from the start that this is going to happen. The point here is that the action is over the extension to driver only operation and the implications that has for the doing away of guards and replacing them with a watered down version which has nothing to do with passenger safety.”

Another member of Southern staff who spoke to Brighton and Hove News on strict condition of anonymity, confirmed the overtime ban, adding: “I think it was quietly bought back in so they could cover some of the vast amount of cancellations. But it’s clearly not working.

“Before the industrial action conductors got an enhanced payment as a thank you for working their day off. This isn’t the case anymore. Just flat money.”

On Monday, a spokesman for GTR, which runs Southern services, said the claim was completely untrue. However, this morning the @SouthernRailUK Twitter account admitted that a ban had been in place but had now been lifted.

A Southern spokesman said: “We want to make this crystal clear – there is no ban on overtime working and some of our train crew continue to work rest days. However, we have seen more of a reluctance to do so recently which, along with high levels of sickness is currently compromising our ability to run a robust train service on a day-to-day basis.

“The featured email has been taken completely out of context and comments made about it in your article are wrong. At some of our conductor depots individual managers had allowed conductors to work part of a shift on overtime, but be paid for the full shift. This is clearly not acceptable and the email is about putting an end to this practice. Nothing more.

“The tweet sent by our twitter team was misunderstood. The ‘ban’ to which it refers was a suspension of mutual shift exchange by conductors, implemented shortly before the first RMT Conductor strike in April. We have listened to our staff about how this was affecting them and have recently reinstated this practice.”