Student charged with GBH over homophobic attack which shocked Brighton

A man has been charged with committing grievous bodily harm after a gay man’s jaw was broken in a homophobic attack on Brighton seafront. 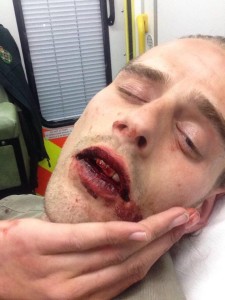 Victim Aaron Woods, from Eastbourne, shared images of his smashed face following the assault on Madeira Drive in May.

Two men were arrested at the time on suspicion of the attack and released on police bail while enquiries continued. Now, Arain Moradi, 21, a student, of Blenheim Crescent, London, has been charged.

He is accused of approaching the 26-year-old victim in Madeira Drive in the early hours of Sunday 8 May and using homophobic language before assaulting him.

Moradi is on conditional bail and due to appear before Brighton Magistrates’ Court on 1 September.