A Brighton restaurant which closed without warning owes more than £200,000 in business rates to Brighton and Hove City Council.

Jimmy’s, at Brighton Marina, is under investigation for “systematic” business rate avoidance, the council said this afternoon (Friday 5 August).

Specialist investigators are working with council officials to try to recover the cash.

The restaurant was also the subject of an investigation and campaign by the Brighton Solidarity Federation.

The group said that it became involved earlier this year after concerns about outstanding holiday pay, fake payslips and other tax-related scams affecting people working at Jimmy’s.

The council said: “Enforcement officers from the council attended the premises earlier this week and removed goods in connection with business rate arrears dating back to when Jimmy’s started trading in 2014.” 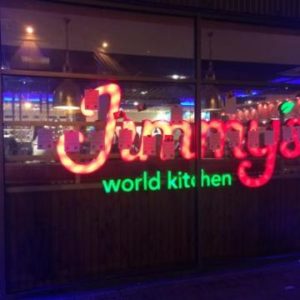 The council’s lead member for finance, Councillor Les Hamilton, said: “We have a legal duty to collect business rates. These help pay for essential local services.

“This is a very complex case. The proprietors of Jimmy’s restaurant have been actively and systematically avoiding payment of local taxation and have ignored our efforts to reach a reasonable accommodation regarding payment.

“We have appointed insolvency specialists Smith Williamson to pursue this. Smith Williamson are also working with a range of other parties who have been affected by the trading activities at the Jimmy’s premises and have the specialist expertise needed.

“It is regrettable that enforcement action has had to be taken, however, we have a legal duty to take robust action as a last resort when all other attempts to collect the unpaid taxes, including court proceedings, fail to get the necessary result.”

The council added: “If you have any further information about the people or companies running Jimmy’s restaurant please email enforcement@brighton-hove.gov.uk. All contact will be treated in the strictest confidence.”

Brighton Solidarity Federation (SolFed) said yesterday (Thursday 4 August) that it had “started a dispute with Jimmy’s Restaurant in February” over the cases of three Spanish members of staff – Paola Costilla, 21, Borja Vidussi Castillo, 24, and Vincente Murillo, 25. They were owed £1,500 holiday pay and wanted their P45 tax forms.

It said: “After the initial investigations, we found out that the company was not paying tax for them even when through the company was deducting taxes from their wages.

“It appeared that around 40 per cent to 60 per cent of the staff were working with a fake contract and received fake payslips, with unlawful deductions.

“Most of the staff were not able to join a public campaign or fight to improve their situation. Despite this, a campaign regarding holiday entitlement and a tax adjustment was started by several of the workers organising with SolFed.

“After more investigations we found out that the company was part of a bigger scam. The company has had around ten different names since 2007. Most of them were closed following insolvency proceedings.

“This is what happened to the company that owed the Brighton Marina branch. It declared insolvent in December 2015 without informing its workers.

“In this way the company avoids workers being part of the list of creditors. It is not a coincidence that the administrator in all the cases was the same, Gagen Dulari Sharma.

“The manager of the restaurant at Brighton Marina, Laxman Lawand, always pretended that he was not part of the scam. But he has been working for Jimmy’s for a long time, at least since 2011.

“Before working in Brighton he was manager of Jimmy’s in Derby. This restaurant also closed suddenly without any information.

“Of course, Blue Mango, a neighbouring restaurant, was also part of the scam. Both restaurants shared the same management and other services. And Blue Mango in Brighton was also owned by Amandeep Uppal, who is one of the leaders, with Kuldip Singh of the big scam related with all the Jimmy’s companies.

“We have been distributing information about the practices at Jimmy’s on our picket lines outside the doors of the restaurant for four months.

“It was also reported to HMRC by the workers. Most of the people decided turn a blind eye on us.

“Due to our limited resources and workers strengths we decided in May to suspend the dispute. We did not have enough support from the majority of the costumers.

“It was a really hard case, against professional con artists. We made a lot of mistakes but at least we made it harder for them.”