A 500lb wartime bomb was blown up by explosives experts called in by Rampion wind farm bosses this afternoon (Tuesday 9 August). 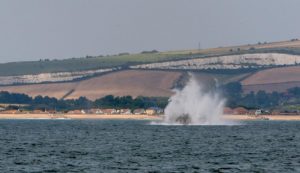 Two bombs were found close together on the seabed as Eon, the energy company building the Rampion offshore wind farm, surveyed the cable route.

The wind farm is being built eight miles south of Brighton and Hove – and the controlled explosion took place a few miles off Lancing at about 3.45pm. The cables come ashore by Brooklands.

The bombs were found about 40ft below the surface in March when an exclusion zone was immediately put in place.

Yesterday Eon development manager Chris Tomlinson said: “Since the discovery we’ve been working with experts to determine the best course of action to clear the site and a routine controlled explosion is now due to take place this coming week.

“We don’t know if there will be much to see as it will depend on sea conditions and whether the explosive material has degraded over time.

“However, as ever safety remains our highest priority and we request that anyone wishing to watch proceedings stays on the beach.”

The second bomb is due to be blown up tomorrow subject to weather and sea conditions.