A university lecturer from Brighton has been suspended after being sentenced by a court for attacking his student lover.

Lee Salter, senior lecturer in media and communication at Sussex University, was convicted of beating up his 24-year-old girlfriend at his home in Aberdeen Road, Brighton.

At Brighton Magistrates’ Court on Wednesday 13 July the 40-year-old lecturer was sentenced to 22 weeks in prison suspended for 18 months and ordered to complete 150 hours of unpaid work.

He was also served with a restraining order to prevent him contacting his former girlfriend Allison Smith.

Salter has appealed against his conviction at the Brighton court on Monday 20 June.

He attacked Ms Smith on Thursday 24 September last year, punching her and stamping on her. And, in court in June, he was also convicted of smashing her iPhone screen and damaging items of her make up.

The Independent newspaper said that, despite leaving Ms Smith black and blue, he was allowed to continue teaching at the university after attacking her.

It is understood that he is currently suspended and that the university has begun disciplinary proceedings now that he has been convicted. 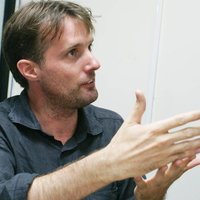 The newspaper said: “Ms Smith had been punched in the face, knocked out and stamped on, and said she had salt poured into her eyes and ears.

“During the 10-month period between his arrest and conviction, Salter continued to teach, the university has admitted, while Ms Smith said she remained so traumatised she was afraid to leave the house.

“She said he attended his court sentencing accompanied by another young student from the University of Brighton.

“The court heard that Salter’s relationship with that student would be ‘closely monitored’ as part of his sentencing.

“On the night of the assault, Salter had become angry and violent in reaction to Ms Smith’s attempts to comfort him, the court heard.

“Salter knocked Ms Smith out with a punch to the face. When she came round, he threw a container of salt at her face, which damaged her nose and chipped her tooth.

“She chose not to attend the trial and described experiencing flashbacks to the night of the assault, as well as being unable to attend job interviews, sleep or socialise as a result of the trauma and anxiety caused.”

The newspaper quoted her victim statement: “The assault, the trial and the anxiety that has come from all of this has changed my life. It has completely put my life on hold.

“A senior member of the university’s management team has been in regular contact with her throughout and they continue to support her.

“The university does not tolerate violence of any kind. However, in cases involving criminal charges, it is important that such matters are dealt with by the police and the courts, which take precedence over employment procedures.

“Pending the outcome of the criminal proceedings, the university kept the situation under review and monitored and assessed any risk to its students.

“The university has established disciplinary procedures and we are considering the implications of the court’s findings.

“The member of staff has not had contact with students following his conviction.

“Although we are unable to comment on individual employment matters we want to assure our community that we take student safety extremely seriously.

“The welfare of our community is paramount and we encourage any student who is experiencing abuse or has concerns about a friend to contact our Student Life Centre, without delay.

“We provide a wide range of support for students including a 24-hour service delivered by a team of professional support staff and a dedicated team of counselling professionals who provide support on campus as well as referring students to a range of other national and local services.

“Our support services can be accessed here: http://www.sussex.ac.uk/students/support/.”