Police have released CCTV images of a man and a woman sought in connection with the theft of cash from a taxi in Brighton. 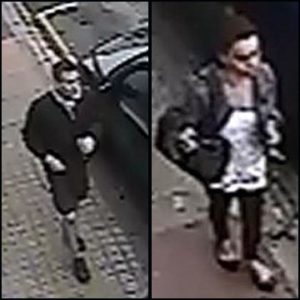 The pair were seen to walk along Bedford Place and peer in through the window of the Mercedes, parked opposite the mosque, before walking off.

However, they returned a short time later, and the man smashed the driver’s side window and took the till containing approximately £100 in cash.

The incident occurred at about 8.30pm on Tuesday 26 July.

The man is described as white, with short brown hair, and wearing a black long sleeved top, dark coloured shorts and black shoes.

The woman is described as white, in her 20s or 30s, with brown hair tied up in a ponytail, wearing black leggings, a white top and a black jackets with a bag over her shoulder.