As fundraisers go, it’s fairly niche – but this didn’t stop a drive to raise money for bring two Finnish illustrators over to Brighton to talk about freedom of information reaching its target within hours. 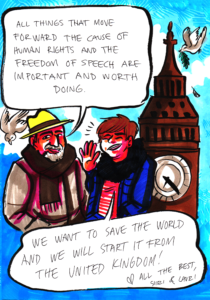 The unusual request came about when Brighton illustrator Myfanwy Nixon, who also works for MySociety and its FOI website WhatDoTheyKnow.com, came across Siiri Viljakka and Lauri Tuomi-Nikula while researching the 250th anniversary of freedom of information this year.

Until then, she thought she was the only person in the world to have drawn comics about Freedom of Information – but in the course of her research, she discovered a 60-page graphic novella about the life of Anders Chydenius, Finnish forefather of FOI, written by the pair.

Nixon, who illustrates under the name Myfanwy Tristram, said on her blog: “Before I knew what I was doing (and I mean that literally; I have never appreciated the full weight of that phrase before) I had located the comic artists on Facebook and written them a note, along the lines of: ‘Oh hey, you have no idea who I am but I saw your comic and I work for a charity that’s big on FOI and I was just wondering – I don’t have any funding or anything – but IF, just IF I was able to get some, would you consider coming to the UK to talk?'”

Thanks to generous donors including Dan Berry’s Make It Then Tell Everybody podcast, a campaign on the crowdfunding site GoFundMe exceeded the £600 target within just over 24 hours.

Nixon said: “I’ve been in touch with Siiri and Lauri and they are delighted. In fact, we basically exchanged emails which read as variations of ‘Wooooooarrrghhhh!’.”

Now Brightonians can hear Viljakka and Tuomi-Nikula speak, when they appear as guests at a Cartoon County meet-up. Normally reserved for practicing cartoonists, Cartoon County is opening this special event to all.

The Finns will also be speaking in Hastings as part of the Hastings & 1066 Country Cartoon Festival, and at Gosh Comics in London.

You can register for the Brighton Cartoon County event at Northern Lights, Little East Street on Monday, 24 October via Eventbrite or Facebook