About 80 people gathered at the site of a planned phone mast yesterday to protest after it was accidentally given the go-ahead thanks to a council cock up. 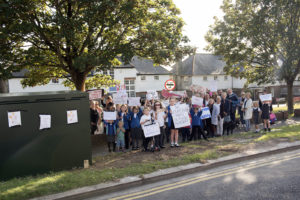 Brighton and Hove City Council apologised last week after it emerged that a refusal notice for the 12.5m high Vodafone mast in Warren Road, Woodingdean, was issued too late to be deemed valid, thus inadvertently green-lighting it.

The site was deemed unsuitable as it is directly in front of historic cottages and will loom over the surrounding buildings. Some residents are also
concerned about perceived health risks – although this would not be a reason to turn it down under planning law.

Ward councillor Dee Simson, who objected to the mast, said she was talking to the council’s legal team to see if there was any other way to stop the mast going up.

She said: “There are a lot of concerns about its location in the sense of the visual impact right in front of the historic cottages, which is why it was refused.

“On top of that there’s also concern about whether a mast so close to a nursery and schools is actually safe. We hear a lot about how these masts are safe, but a lot of people are still concerned.

“Even though the mast isn’t up yet, the box is very intrusive. Once the mast is up it will be the first thing you see coming round the bend.

“It’s going to impact more than the i360 on the cit – it’s going to be right in your face.

“I have got the council’s legal team working on it, but the protesters are appealing to the better nature of Vodafone, saying this isn’t the right place for it, why don’t you look elsewhere?”

However, it seems likely that their pleas will fall on deaf ears. A spokeswoman for Vodafone said: “Under planning law, mobile phone operators are required to submit an application for prior approval for a mast of this kind.

“The local planning authority have a set time to refuse permission, after that time period has elapsed approval is deemed to have been granted.

“In this case we have deemed consent to build a mast which will provide fast 4G services for both O2 and Vodafone customers, and which also improve the existing 2G and 3G coverage locally.

“We understand that some people have concerns about masts in the community, but if we are to provide coverage, they must be located where people use their devices – where they live, work and travel.”