Brighton pop star Jordan Stephens is fronting a campaign to tackle the stigma that prevents some young people from seeking help with their mental health.

He hopes that young people will be more open, understanding and supportive with each other as a result.

Stephens, 24, became famous as part of the hip-hop duo Rizzle Kicks, along with Harley Alexander-Sule.

He sings about being in a hole and fighting “my own crazy” in his latest solo song, Whole, which is released today (Monday 10 October) on World Mental Health Day.

It marks the start of the “I Am Whole” campaign – with the Twitter hashtag #IAMWHOLE – in partnership with the NHS and the YMCA.

The track is on his album Vert with a video featuring the #IAMWHOLE campaign along with young people from Brighton and Hove who have experienced mental health difficulties.

Research by the YMCA found that one in three young people with mental health difficulties in Sussex felt stigmatised.

Two thirds of those said that the stigma had stopped them from seeking help and the same proportion said that it had affected their school work.

Those affected said that had been socially excluded and verbally abused, often by people they classed as friends.

And more than four in five felt unable to talk about their mental health problems because of the stigma around the subject.

Stephens said: “The #IAMWHOLE campaign message that ‘together we are whole’ is so important and I am pleased to be launching it today on World Mental Health Day.

“My mum is a trained therapist so I’ve seen how important it is for people to get the right support and not to feel isolated.

“I’ve also had friends and people close to me seriously affected by mental health issues. I wrote Whole to express how I was feeling at the bottom of a situation.

“When the NHS suggested it could be used to give other people a way of feeling less alone, man that felt really good.”

It is being supported by NHS services and community groups throughout the area. It is led and run by a group of local GPs and nurses who are responsible for planning, buying and monitoring local healthcare services, including mental health and children’s hospital services.

Stephens played his song Whole at an event held at the i360 last week to dozens of volunteers from the YMCA’s Right Here project from local schools, colleges and universities. 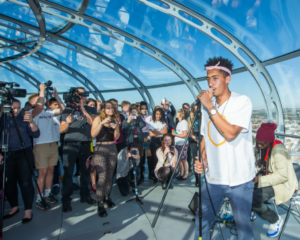 Right Here is a young person’s health and wellbeing project for 12 to 25-year-olds, with teams of youth volunteers who design and carry out their work in collaboration with project staff.

The youth volunteers have been holding mental health and wellbeing workshops in schools over the past six years, including health promotion campaigns.

They have also carried out research and peer consultations, provided training to professionals and given feedback to family doctors’ practices.

Others supporting the campaign include another pop star, Ed Sheeran, the actor James Corden, TV presenter Dermot O’Leary and the Game of Thrones actress Faye Marsay.

A number of supporters will be wearing branded sweatshirts and T-shirts designed by Stephens.

A leading local doctor, Rebecca Jarvis, the clinical lead for mental health at the Brighton and Hove CCG, said: “We created #IAMWHOLE to tackle mental health stigma in a way that speaks directly to young people so that they feel as comfortable seeking help for a mental health issue as they would for a physical health condition such as asthma.

“One in ten children and young people experience mental health difficulties every year across the UK but we know that only 25 per cent of those in need of effective mental health support are currently accessing it.” 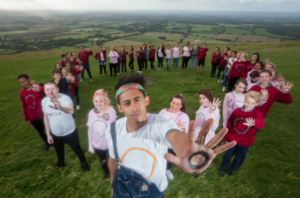 YMCA Downslink Group chief executive Chas Walker said: “YMCA’s research backs up conversations we have had with young people in which they have told us mental health is one of the principle worries affecting their generation today.

“What is alarming from these findings is the widespread stigma young people are now seeing or experiencing from others that is making them less likely to seek professional help.

“That’s why we are encouraging everyone to support #IAMWHOLE to help overcome the stigma we have identified and the negative consequences young people are facing when trying to deal with their mental health difficulties alone.”

The #IAMWHOLE campaign is calling for the public to
1. Challenge harmful language used to describe mental health difficulties so that young people can ask for help without fear of negative labels
2. Ask for support from friends, parents, teachers, GPs or youth workers
3. Show support by joining the #IAMWHOLE movement on social media and posting “circle on hand” selfies in support of the anti-stigma message
4. Find and get help by visiting www.findgetgive.com – a mental health services directory for young people created by the YMCA’s Brighton and Hove Right Here project in partnership with other local groups.

The “Find Get Give” site allows people to search for support, share stories about their own mental health and give feedback on services they have used for others to read. It also includes resources for parents and carers.

“We know that 50 per cent of mental illness in adult life starts before the age of 15 and 75 per cent by the time young people reach 18 years old.”

Dr Wilkinson added: “By raising awareness of the issues and support available, the #IAMWHOLE campaign aims to help teenagers and young adults look out for each other as well as making sure everyone knows where to go for professional advice if they need it.”