A long-running campaign to boost refunds when trains are delayed has succeeded today with the Government announcement that the threshold for compensation with be slashed from 30 minutes to 15. 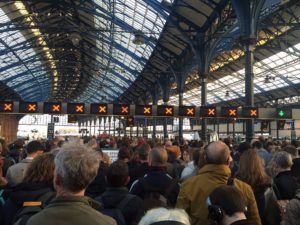 Chaos at Brighton Station this morning. Picture by Steve Bassam on Twitter

Brighton Pavilion MP Caroline Lucas and Hove MP Peter Kyle have been among those backing Which?’s call for the change to the delay repay scheme for many months, even before the dispute between Southern Rail and the RMT plunged the Brighton line into even more chaos.

However, as the third day of this week’s strike is now underway, commuters won’t yet be able to claim for these smaller delays as the changes won’t come into effect for a few months yet.

Caroline Lucas MP said: “At long last the Government is giving some relief to long suffering passengers on Southern Rail.

“People suffer delays on a daily basis and this scheme will go some way towards compensating them for the constant interruption in their lives. Of course these improvements are only a sticking plaster, and don’t fix the long term problems on the line.

“Both the Government and the train company are responsible for the utter failure. Indeed the way the rail strike has been handled in recent days shows yet again that GTR is not fit for purpose. It’s time to strip them of this franchise, put this railway line in public hands and make Ministers directly accountable.”

Peter Kyle MP said: “Ever since I became an MP, I’ve been trying shift the power away from government and the rail companies and back to the passengers. Passengers are the ones who suffer when things go wrong and who nobody had been listening to up until now. This move is one small step in the right direction.

“I’m really pleased that all my campaigning alongside Which?, as well as the work of the APPG I co-chair and the steadfast campaigning locally has delivered this small victory.”

The Government said the change will be introduced within months on Govia Thameslink Railway (GTR) services, including Southern, and then rolled out across the country.

Transport Secretary Chris Grayling said: “We recognise that, above all else, passengers want a reliable train service, but when things do go wrong it is vital that they are compensated fairly. Delay Repay 15 is a major improvement for passengers and we are working with train companies to make it as easy as possible for passengers to claim their rightful compensation.

“Together with the Consumer Rights Act, this policy shows we are putting passengers first and making sure they receive due compensation for poor service.”

The existing Delay Repay thresholds are as follows:

As well as ‘Delay Repay’, the introduction of the Consumer Rights Act on 1 October 2016 strengthened the right of passengers to claim compensation for poor service.