Former Brighton maternity hospital to be turned into flats

The birthplace of thousands of Brightonians is to become a block of flats and a terrace of restored town houses.

The building on the old Brighton maternity hospital site will be pulled down and replaced by a five-storey block of 20 flats.

The site sits on the corner of Buckingham Road and Upper Gloucester Road and extends down to Buckingham Street.

Planners were pleased to hear that the developer, Buckingham Developments (Brighton), wanted to demolish the breeze block eyesore on the corner of the site. It was built in the mid-1970s after the closure of the maternity hospital which occupied the old Brighton Grammar School building. The school later became BHASVIC.

The current building was used as a day centre by Brighton and Hove City Council social services until spring last year, since when it has been empty.

The neighbouring Victorian terrace will be turned back into four houses and the overall site will also include space for community use.

The terraced buildings were being used for people with mental health problems. Services were moved and the premises were vacated by Sussex Partnership NHS Foundation Trust a few years ago. 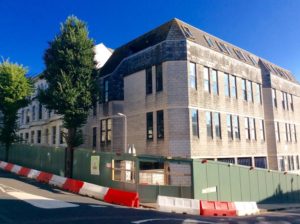 Councillors were told that a plaque – commemorating former long-serving grammar school head Ebenezer James Marshall – was in storage for now but would be on the new building.

Councillor Leo Littman said: “I really like this. Anyone who has ever seen 80 Buckingham Road – there are not many things you could replace it with that would make it worse.

“I was interested to hear the point about the moving of a blue plaque. 80 Buckingham Road was the site of the Buckingham Road maternity hospital in which many worthies of Brighton were born.”

The comedian Terry Garoghan – jokingly known as Brighton’s Unofficial Mayor (or BUM for short) – was among them and Councillor Littman added that he was born there too.

Councillor Lynda Hyde said that her children were born there and Councillor Littman added: “My only question about the design is will there be room enough for all the blue plaques that will be needed?”

But aspects of the design were criticised by other members of the committee, notably the roof. It was described in a report to councillors as a “particularly striking contemporary ‘mansard’ structure with corner glazing elements and integrated balconies”.

But Councillor Adrian Morris said: “The mansard roofs really do look as if a young child has made an unsuccessful attempt at origami. I think is most unfortunate and my view is that actually they are quite ugly.”

He also criticised the design of the balconies.

Councillor Lloyd Russell-Moyle said: “Personally, I don’t mind the roof so much. But I do feel that if the roof is to be done it needs to be done with an iconic kind of metal – a zinc that goes grey would be no good.

“It needs to be a kind of a good copper that will age and colour beautifully – something that will stand out.

“If it’s going to be a roof like that, it needs to be a piece that is remarkable rather than just, say, a piece that dulls with age.

“You’ve either got to make something of it or you’ve got to not have it. You can’t have a halfway house.

“I wouldn’t want this committee trying to dull it down because they don’t like the look of it and we end up with something that’s just dull.”

He added that “we need housing in the city” and accepted that this would sometimes mean compromising on parts of schemes such as the design. 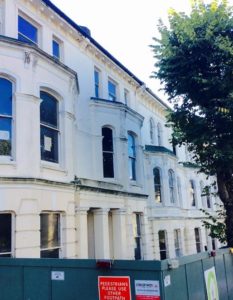 Councillor Hyde said that she admired the “beautiful town houses” but was less keen on other aspects of the design.

“Overall it’s a good use of the site.”

And Councillor Carol Theobald said that it would “improve the street scene” and added: “I don’t mind the roof because it’s interesting.”

The committee agreed that Buckingham Developments should pay a developer contribution of more than £150,000 towards local services. The total includes £68,000 for open spaces, £62,000 for education, £14,000 for sustainable transport and £7,400 towards the Local Employment Scheme.

The company, owned by 58-year-old Philip Blackwell, of the Blackwell’s bookshops family, has a 250-year lease on the site for a peppercorn rent. The council retains the freehold.