A new park was officially handed over to Brighton and Hove City Council last week by a housing developer after months of pressure from residents angry that it had been left half finished. 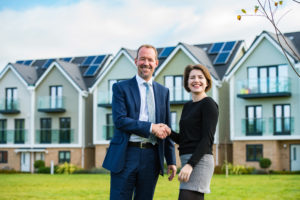 Bellway Homes handing over open space to Brighton and Hove City Council at the back of its Redhill Close housing scheme. Bellway Kent managing director Chris Moore is pictured with Councillor Saoirse Horan, the deputy chair of the council’s Environment, Transport and Sustainability Committee – Photo by Liz Finlayson/Vervate

Bellway Homes agreed to provide the play spaces at Redhill Park as part of a planning agreement when it was given permission to build 31 homes on the former Redhill sports ground in 2011.

The play areas were originally meant to be finished in July 2014 and include several pieces of play equipment such as swings, climbing frames, play huts and boulders. But it was only after residents started a campaign last October that work started in earnest on the site.

And even now, the finished park, with just one baby swing and some carved totem poles for children to play on, is a long way from the playground promised in the first plans.

Resident Vicky Cohen, who started last year’s campaign, said: “I’m very disappointed in it. It’s a depressing park because it’s full of promise but it’s not being looked after.

“There aren’t any things for children to play on. There’s a single baby swing in the little bit on the roundabout but really very little else.

“The path isn’t lit at the top of Valley Drive. There aren’t any dog mess bins and people are letting their dogs foul in the children’s play area.

“The grass on the football pitch has been allowed to grow very long so you can’t play on it. It doesn’t appear to be being very well looked after.”

With huge cuts to the parks services looming, Mrs Cohen is realistic about the prospect of making improvements to the park now that it is under council control.

She said: “Unfortunately we are going to have set up a Friends of Redhill Park group. I’m happy to do fundraising but that’s as long as the council can keep what equipment there is maintained and they’re open to fundraise and putting more equipment in there.”

The developer has also provided the council with about £150,000 to cover future maintenance costs for the site.

Councillor Horan said: “With so much pressure being put on councils to create more housing, we must be careful not to lose sight of the importance of providing green space for our communities.

“That’s why we are pleased to have worked with Bellway Homes to create this lovely new park which is already being well used by local families.

“We also welcome the funding provided by Bellway Homes which will help ensure that the park is maintained into the future, despite the ongoing pressure to council budgets.”

The Gatton Park development, of 31 units including family homes, lies between Redhill Close and Millcroft. Bellway Homes agreed, under a deal known as a section 106 agreement, to transfer part of the site to the council for recreational open community space.

Also under the section 106 agreement, the adjacent scout hut and land was transferred to the Westdene Association Guides and Scouts, with Bellway providing just over £27,000 to improve and maintain the facility.

Mr Moore said: “At Bellway we are aware that we are not just building homes, we are creating communities that people will love to live in for many years to come.

“That’s why it’s so important to create these areas of green space that families can enjoy as part of our housing developments. It was fantastic to visit the park for the official handover and to see locals enjoying spending time there.”