The Royal Pavilion Ice Rink in Brighton has opened for the winter season.

Olympic skating hopefuls Zoe Wilkinson and Christopher Boyadji took to the ice for the official opening, watched a crowd that included by Brighton and Hove mayor Pete West.

“It was great to see Zoe and Christopher perform in such a lovely setting. We hope that visitors to the rink will be inspired to go on and skate more in the future.”

The rink opened to the public for the seventh year this morning (Saturday 5 November). 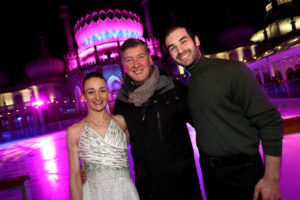 Councillor West said: “My family and I have had a really wonderful time at the launch of the Royal Pavilion Ice Rink.

“We always love it here, both taking a spin on the ice and enjoying the restaurant. The city is so lucky to have the rink here every winter and in such an amazing location.”

Tickets cost from £10 for adults (aged 12 and over) and £7 for juniors (children under 12) with no charge for spectators.

There are ten sessions a day from 10am to 10.15pm with Club Rinkidinks – from 10am to 11am – free for under-fives if they are accompanies by an adult paying full price.

There is a beginners’ area as well as the main rink plus seating for food and drinks.