Construction workers battled with a huge jet of water shooting 30ft into the air in Lewes Road yesterday.

Builders working at the site on the corner of Lewes Road and Newmarket Place tried to find the source of the jet as they were showered with cold water at 4.30pm.

A rush-hour crowd gathered around the dramatic scene, watching on as a single construction worker battled against the powerful jet of water.

The enormous amount of water made it difficult to get the situation under control but the water eventually stopped after a few minutes, with bystanders clapping and cheering.

A construction worker was approached at the scene but didn’t know what had caused it.

A spokeswoman for Southern Water said: “There was a leak on a private supply pipe. We were contacted after the event but, by the time we arrived, a third party contractor had isolated the leak and fixed it.”

Both Lewes Road and Newmarket Place remained open while the water was dealt with.

The builders were working on a block of student flats currently being built by property company McLaren. 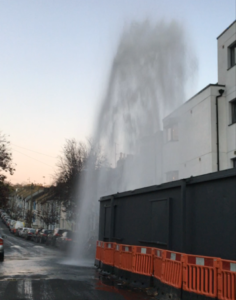