60,000 homes to have wheelie bins for recycling across Brighton and Hove

Some 60,000 homes are to have wheelie bins for recycling across Brighton and Hove after a trial proved popular and successful in Hangleton and Portslade.

One member of Brighton and Hove City Council – Tony Janio – said that the only complaint he had heard during the trial was from residents who weren’t included but wanted to be.

The £1.1 million extension of the scheme was approved by the council’s Policy, Resources and Growth Committee at Hove Town Hall on Thursday night (8 December).

On the evidence of the trial, recycling rates will improve. The council said: “They will go to any property considered suitable after a street-by-street assessment.

“The bins proved popular in a trial last year involving 4,000 homes in Hangleton and South Portslade, where recycling rates jumped by 4 per cent.

“In October the council’s environment committee approved the full roll-out in principle.”

Now that funding has been approved to extend the scheme, officials will look for a single supplier. 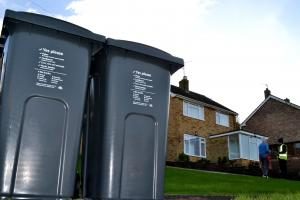 The council added: “An exact timescale for the roll-out has yet to be fixed but it is expected around spring 2017.

“The new bins would be used to recycle cans, aerosols, card, paper and plastic bottles. Glass and batteries would still be separated and left in a black box.

“In the trial, households recycled around 1.1kg more waste per fortnight. The amount of general household waste collected decreased by an average of 1.2kg.

“More than 95 per cent of residents taking part in the trial told the council that using wheelie bins made it easier to recycle.

“During the trial, council officers received dozens of inquiries from residents living in other areas of the city, asking for recycling wheelie bins.”

Councillor Gill Mitchell said: “We must increase our recycling rates and the trial strongly suggests this will help.

“Our surveying showed people really appreciate the new bins. They store more material and are easier for residents and staff to shift about.

“We want to make recycling more user-friendly and explain to people its environmental benefits and how it saves taxpayers’ money.”

Residents will be issued with 240 litre wheelie bins – equivalent to five black boxes – plus a box for glass.

Any properties unsuitable for a wheelie bin can continue with the current arrangements. The collections will still take place fortnightly – the same as for black boxes.