Southern strikes to go ahead

Southern has lost its appeal against the refusal of an injunction to stop its drivers striking in a series of dates over the next month which starts tomorrow. 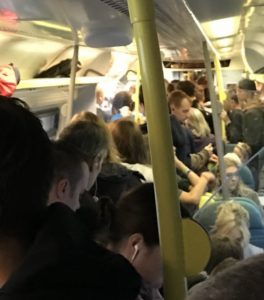 Earlier today, the train operator said that even if the injunction was granted at the Court of Appeal, services would still be severely restricted tomorrow as its drivers and trains would not be in the right place.

But now that Lord Justice Elias,sitting with Lord Justice Lewison and Lord Justice Lloyd Jones, have turned down the appeal, the disruption looks set to continue for many more days to come.#

Mick Whelan, general secretary of Aslef, said: “Industrial action is always the last resort. We don’t want to inconvenience the travelling public, and our members don’t want to lose money. We are going on strike because we have been forced into this position by an intransigent management that has not been prepared to negotiate with us.

“Even now, all we want is for the company to sit down with us and negotiate – properly, sensibly and in good faith, not to simply restate their old entrenched position – and do a deal for the benefit of passengers, staff and, of course, the company. Like ScotRail did with us earlier this year.

“Chris Grayling says this strike is political. It isn’t. It’s industrial. The only people who have been playing politics here are Chris Grayling, Peter Wilkinson at the DfT, and GTR.

“Passengers don’t want driver only operation. They want a guard on every train. Because they know that DOO is inherently unsafe. The company – which cares only about profit, not about passengers – knows, as we know, that there are serious problems with the platform/train interface.

“DOO is old, not new,technology, designed for four-car 317s on the Bedford to St Pancras line in the early 1980s at the fag end of British Rail when everything was about managed decline.

“We have seen an increase n the number of passengers we are carrying on the railway every day. We now have 1,100 passengers on a 12 car train and, under DOO, just two seconds to check 24 sets of doors. That is simply not adequate time to deal safely and properly, with the travelling public.”

Charles Horton, Chief Executive of Govia Thameslink Railway, said: “Naturally we are disappointed with this decision. We had a responsibility to the travelling public to do what we could to stop this unprecedented strike action.

“Regrettably, there will be no train services for passengers tomorrow, Wednesday and Friday. We strongly advise people not to travel. In addition, there will be severe disruption every day during the ongoing industrial action because of the union’s overtime ban.

“This is wholly unjustified and unnecessary industrial action. The widespread use of drivers operating trains is perfectly safe both in Southern and elsewhere in the UK where a third of trains operate this way every day.”

“We will now be asking ACAS to convene urgent and immediate talks between GTR and ASLEF; talks that we hoped to get moving over the weekend, but ASLEF would not agree.

“Our aim is to find a resolution to their dispute so we can bring an end to the misery being suffered by the travelling public.”

The emergency timetable in brief:

During the drivers’ strike

From Tuesday 6 December until further notice:

Further details will be available on the Southern website www.southernrailway.com later.

Online journey planners will be updated only 24 hours before the strike date in question. Customers are advised to check regularly for travel updates at southernrailway.com/strike.