A set of stairs which provide a shortcut from London Road to the back of Brighton Station which were hailed as a “stairway to heaven” when they first opened a year ago became more like hell for commuters this winter after the lighting failed. 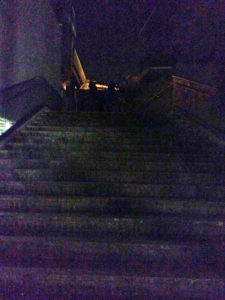 The steps, leading up from Stroudley Road to the station drop off point, were built by Hyde Housing as part of its housing development off Stroudley Road, and opened in November last year.

At some point over the past year, the lighting failed and as the days became shorter, commuters had to negotiate the steps in the dark.

But this week, the temporary lighting was repaired and Hyde says it is going to install permanent lights within the handrails.

Commuter Susan Bentley, who regularly uses the stairs, said before the lights were fixed: “Since the clocks went back everybody coming up and down those stairs is either walking incredibly slowly or is having to do what I’m doing, which is turning the torch on their phone on.

“They’re quite slippery steps in the rain. I consider myself an able bodied person and going up and down those steps, and I’m having to hold onto those handrails in the complete blackness.

“The lift was operational for about two weeks and is now closed off so there’s been no disabled access that way for most of the time.

A spokeswoman for Hyde said: “We were made aware there was an issue and have since repaired the temporary lighting for the stairs at Brighton Station. New permanent lighting is being installed within the handrails to the stairs and is currently being manufactured.”

Twitten takes to Twitter to complain about blocked drain