Two men robbed a supermarket in Hove at knifepoint on Christmas Eve and fled on a stolen motorbike with hundreds of pounds in cash.

Sussex Police issued an appeal today (Friday 30 December) for anyone who saw the robbers or who knows anything about the hold up.

The force said: “Police are investigating a Christmas Eve robbery in which cashiers at Tesco’s store, The Droveway, Hove, were threatened with a knife as two offenders stole several hundreds of pounds cash from their tills.

“The incident occurred at around 8.20pm on Christmas Eve (Saturday 24 December) and involved two men, one wearing a motorcycle helmet and the other a balaclava.

“A 36-year-old man and an 18-year-old woman were the members of staff threatened before the robbers made off on a green/blue motorcycle in the direction of Dyke Road.

“The motorcycle was identified as having been stolen earlier in the day from Southampton Street, Brighton. 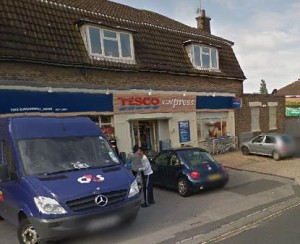 “Anyone who saw what happened, who may have noticed the two men on a motorcycle or who may have any other information is asked to email 101@sussex.pnn.police.uk or phone 101, quoting serial 1136 of 24/12.

“It is also possible to report details online https://sussex.police.uk/contact-us/response-to-appeal.