Brighton and Hove Albion have signed Chelsea and England under-20 right-back Fikayo Tomori on loan until the end of the season.

Albion said: “The 19-year-old Canadian-born defender passed his medical at the American Express Elite Football Performance Centre earlier this evening and will link up with his new team-mates tomorrow ahead of the visit of Cardiff City.”

Manager Chris Hughton said: “We have brought in Fikayo on loan from Chelsea to provide us with some additional cover in the full-back positions and we are delighted to welcome him to the club.

“He is a highly rated young full-back – by both Chelsea and England. He is predominantly a right-back but he can play in any position across the back four and will give us good defensive cover for the first-team for the second half of the season.

“Currently we have a few minor injury issues in the full-back positions so his arrival will also allow us to send Rob Hunt out on loan to gain valuable playing experience.

“At this stage of Rob’s development, it will benefit his long-term progression to be playing regular senior football.” 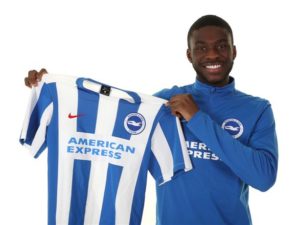 Albion added: “Tomori has represented Canada and England at youth level and is eligible to play international football for Nigeria through his parents.

“He has been with Chelsea since the age of eight and made his debut for the club’s first-team in their final match of last season against champions Leicester City at Stamford Bridge.

“Tomori has been a regular in Chelsea’s under-23s over the past two seasons and helped the club to win back-to-back FA Youth Cups and to successive UEFA Youth League Finals in 2015 and 2016.

“He was also named in the UEFA European Team of the Tournament last summer after an impressive campaign with England’s under-19s.”