The company chosen to redevelop the King Alfred site in Hove has reported a big jump in annual profits.

Crest Nicholson, which is also building flats in Davigdor Road, Hove, said that its pre-tax profits rose 27 per cent to £195 million in the year to Monday 31 October.

The company’s full-year results show that profits were boosted by an 18 per cent rise in average selling prices over the year after the group shifted to more expensive locations and properties.

In Davigdor Road – which is being marketed as the Artisan apartments – Crest opted to pay £1.2 million to Brighton and Hove City Council rather than include “affordable” homes among the 47 flats in the block.

An artist’s impression of the Artisan apartments in Hove

Crest said that sales were affected amid the uncertainty in the months surrounding the referendum on leaving the European Union.

Sales fell temporarily during the Brexit debate and there had been a higher number of cancellations, the company said.

Crest chief executive Stephen Jones said that it had been a “landmark” year for the group.

Mr Jones was bullish about the outlook for the year ahead despite having some concerns about the implications of Brexit.

But he added: “The outlook for the housing market continues to look promising. 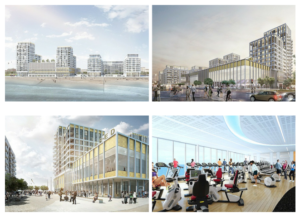 “While the UK’s vote to leave the EU in June had a temporary effect on our sales volumes, the impact was relatively short-lived, with reservations and consumer confidence stabilising within a few weeks.”

Mr Jones had a warning about the government’s Brexit objectives: “European workers in the UK’s construction force have been essential in delivering much-needed homes.

“It is important to the objective of increasing housing output that a supply of European labour is maintained.”

He also had concerns about the possibility of slower growth in the future if consumer confidence was dented by Brexit talks.