A man sustained a serious head injury when he was attacked with a glass bottle in Brighton. 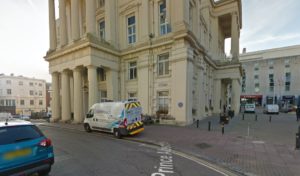 The 28-year-old local victim was walking dogs with a friend in Bartholomew Square at some time between 11pm on Saturday (March 25) and 1am on Sunday when he was hit on the forehead sustaining a deep cut. He returned the dogs home before setting off for A&E at Royal Sussex County Hospital, but was stopped by a concerned passer-by who called an ambulance.

His attacker, who was not known to him, is described as white, 5′ 8″, of medium build, in his early 20s with dark hair. He was wearing dark trousers and a striped T-shirt. He is understood to have been with some other men, playing with what might have been a frizbee.

Anyone who witnessed the incident or has information about the attacker or the people he was with is asked to report online to https://sussex.police.uk/contact-us/response-to-appeal/ or call 101 quoting serial 96 of 26/03.