A Sussex University academic has been recognised for his work with one of the most prestigious prizes for scientific research.

Laurence Pearl, head of the university’s Life Sciences School, has won the Novartis Medal and Prize in the Biochemical Society Awards 2018.

Professor Pearl received the prize for his research into the structural biology of DNA repair, protein kinase signalling and molecular chaperones.

The Novartis Medal and Prize is awarded annually in recognition of the contribution scientists make to the development of biochemistry.

Professor Pearl, who has led the Life Sciences School since 2009, is not the first recipient with Sussex links.

The Novartis Medal and Prize winner is named as part of the Biochemical Society’s annual awards which recognise 11 scientists for the excellence of their work and the profound impact their research has had on the scientific community and wider society. 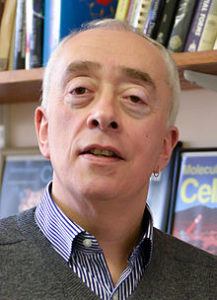 Professor Pearl said: “I’m delighted and amazed by this award and overawed to be in the company of the previous recipients which includes so many scientists who have inspired me throughout my career.

“I’ve been incredibly lucky with the clever and determined people who’ve come to work with me over the years and our international network of collaborators.

“We are deeply indebted to Cancer Research UK and the Wellcome Trust for their generous long-term support which has given us the space to ask really interesting and difficult questions.”

The acting chairman of the awards committee, Professor Colin D Bingle, said: “Professor Pearl is an impressive biomedical scientist who has made significant contributions to our understanding.”